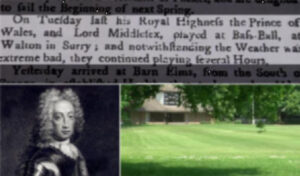 David Block, author of the landmark book Baseball Before We Knew It: A Search for the Roots of the Game is generally recognized as the authoritative work on the subject of baseball’s origins. He’s also a member of the Society for American Baseball Research. Block was combing through a 1749 copy of The Whitehall Evening Post when he spotted the following news item: “On Tuesday last, his Royal Highness the Prince of Wales, and Charles Sackville, Lord Middlesex, played at Bass-Ball (sic), at Walton in Surry (sic); notwithstanding the Weather was extreme (sic) bad, they continued playing several Hours.”

From the earliest reference to cricket in the Guildford borough records, William Bray’s diary reference to baseball in 1755 through to the battle of the Somme, when the 8th battalion of the East Surrey Regiment charged across no-man’s land kicking footballs in front of them, sport has played a major part in Surrey’s history. Baseball in mid-18th-century England would have looked very different than modern American baseball.

The game would have been played on a smaller scale than the modern pastime, with shorter distances between the bases and with the pitcher standing much closer to the batter. The ball was much softer than today’s; and instead of a bat, the palm of the batter’s hand was used to strike the ball. Yet despite these differences, the basic elements of 18th-century English baseball – pitching, batting, base- running and fielding – were comparable to those found in its later American namesake, and Block believes there is little doubt that English game was the forerunner of the modern American pastime.

Block is the author of the 2005 book Baseball Before We Knew It published by University of Nebraska Press. He is also a member of Major League Baseball’s “Baseball Origins Committee” under the chairmanship of MLB’s Official Baseball Historian, John Thorn. In 2013, Surrey County Council stated, ‘Baseball is an integral part of American life and this news about a national obsession in the US, where homegrown sports have traditionally dominated, will reverberate far and wide.

It is a game steeped in history and now the Surrey County Council’s History Centre and the inquisitive historians David Block, Tricia St. John Barry and Julian Pooley have provided the ea rliest manuscript proof that the game the Americans gave to the world came from England’.

Go to the WoTTA.co.uk website for full details and to watch David Block giving an interview.

Coming Soon: Walton-on-Thames Trading Alliance and Walton Cricket Club are working with the Blue Plaque Trust and Baseball Softball UK planning an exciting event to commemorate this amazing fact about our town! Read more about this event in next month’s Walton Matters.