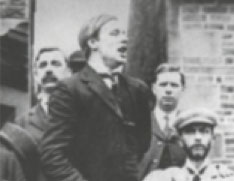 Albert Victor Grayson was an English socialist politician of the early 20th century. A Member of Parliament from 1907 to 1910, he is most notable for his sensational by-election victory at Colne Valley in 1907, and for his unexplained disappearance in 1920. Albert Victor Grayson was born in Liverpool, the seventh son of William Grayson, a Yorkshire carpenter, and Elizabeth Craig, who was Scottish.

He became an apprentice engineer in Bootle. He joined the Independent Labour Party and toured the country giving lectures, becoming a well-known orator despite having a stammer. Grayson rarely attended the House of Commons and began to develop a drinking problem. After losing his seat in the January 1910 general election and failing even to retain his deposit when standing for Kennington, he continued his lecture tours but suffered a mental breakdown in 1913. In 1918 Sir Basil Thomson, head of the Special Branch, asked Maundy Gregory to spy on Victor Grayson.

Grayson held left-wing views and was suspected of working as an agent for the new communist government in Russia. It was also feared he might be working for the Irish Republican Army. Grayson discovered Maundy Gregory was spying on him and with the help of some important friends found out that the Prime Minister, David Lloyd George, was using Gregory to sell political honours.

At a public meeting in Liverpool, Grayson accused Lloyd George of selling honours for between £10,000 and £40,000. Grayson declared: “This sale of honours is a national scandal. It can be traced right down to 10 Downing Street, and to a monocled dandy with offices in Whitehall.

I know this man, and one day I will name him.” Grayson’s “monocled dandy” remark let Gregory know that he was in danger of being exposed. At the beginning of September 1920, Grayson was beaten up in the Strand. This was probably an attempt to frighten him, but he continued threatening to name the man behind the corrupt system. On 28 September 1920, Grayson was out drinking with friends when he received a telephone message. He told his friends that he had to go to the Queen’s Hotel in Leicester Square and would be back shortly.

He did not return. Donald McCormick claimed that artist George Flemwell had been painting a picture of the Thames when he saw Grayson entering a house (Number 6, The Island, Thames Ditton) on the river bank on 28 September 1920. Flemwell knew Grayson, having painted his portrait before the war, but did not realise the significance at the time because Grayson was not reported missing until several months later. An investigation carried out in the 1960s revealed that the house that Grayson entered was owned by Maundy Gregory. Research by Andrew Cook, however, suggests that McCormick may have fabricated the story.

Grayson was never seen again. It has been speculated that he was murdered to prevent his revealing evidence of corruption. A comprehensive biography by David G. Clark suggests his possible survival into the 1950s under a pseudonym. Clark also argued that Grayson was bisexual, a claim repeated elsewhere.