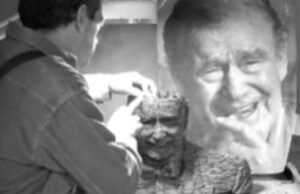 Stephen Kettle is not a regular sculptor as such, but creates art out of tiny chips of slate. Over the years he has had numerous high profile commissions and his work had been championed by none other than James May of Top Gear fame. His most recently piece to be unveiled is of First Sea Lord Admiral Sir George Zambellas (see below). The level of detail in the facial expression is quite uncanny. Remember that every tiny nuance is created by stacking slivers of slate. This piece took 8 months, working morning until night.

Stephen Kettle has not always been an artist or sculptor. Having spent 15 years as a plasterer after coming out of the Royal Navy, he pursued his unique slate art very much as a hobby, exhibiting in small shows, until the fateful day when the phone rang. The caller was keen to find out if Stephen could create a life sized statue and could he email a photo to show that he could create a likeness. In calm panic, Stephen explained that of course he could and yes, photo would be sent shortly. The calm panic was down to the fact that Stephen had never done anything like it, but with the prospect of a commission for a statue for the London Science Museum, paid for by a US billionaire, this was not going to stand in his way!

Stephen took a week off plastering and set about sculpting his own face in tiny slate chips. He put off the billionaire with stories of internet problems, but always with the promise that he would deliver. Deliver he did, just one week later, and the commission for a statue of the spitfire designer R. J. Mitchell was his. He never looked back!

The word “slate” comes from the old French verb “eclater”, to split. Stephen takes blocks of 500m year old Welsh slate and literally splits them into slices. These slices are broken down into coin size pieces and then tumbled in a cement mixer to soften the edges. He then assembles them using an adhesive of his own creation. The whole process is laborious and precise, but Stephen loves it. His works are in many public and private collections and his most celebrated piece is the statue of wartime code breaker Alan Turing which is permanently housed at Bletchley Park in Buckinghamshire. The statue comprises of 500,000 individual pieces of stacked slate, with 200 pieces in the shoe laces alone. The piece took 18 months to create and has won numerous awards.

So now that his latest piece has been unveiled and has been well received, Stephen can crack on with his next commission which is a double portrait of HRH Prince of Wales and the Duchess of Cornwall and due for completion in November. What does the future hold for Stephen? It seem that the sky is the limit. How about that fourth plinth in Trafalgar Square? Now there’s an idea!