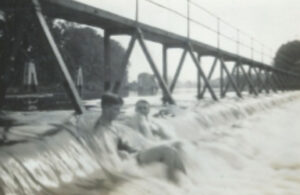 The internet has brought contact from all over the world in matters related to Sunbury. I am lucky to have a close relationship with the Sunbury & Shepperton History Society so it sometimes results in us doing some joint detective work.

Recently a gentleman from Australia inherited some old photo albums, originally belonging to his great grandfather. Several of the photos seemed to be from the Sunbury area but he wanted help in narrowing down where they were taken from, and in identifying the house called Willowdene where great grandfather Walter Frederick Sanders lived.

The photos indicate an indolent lifestyle; tea on the lawn by a weir and cooling off in the weir itself. Remember that the 1920’s saw people escape to the country to enjoy the fresh air, once the railways arrived. Sunbury was a favourite such getaway.

What we have been told is that Great Grandfather Sanders originally lived in Willowdene before moving to Rushdene in the mid 1930’s because of the flooding issues. Rushdene is in Parke Road and the views from the garden across to the weir are recognisable, although the profile of the island and of course the fish weir have changed. But what about Willowdene, the original residence? There are no houses on Wheatley’s Ait called Willowdene, and although house names are changed, no one has a record of an old name being Willowdene either.

Help is at hand though in the form of some of our long term residents who were around at the time. 97 year old Dennis Brock spent a lot of his time on Wheatley’s Ait in the 1930’s. He pointed out that in the mid 1930’s the Creek was straightened at the same time as the Desborough channel was cut. These were projects to create more efficient water flow and alleviate flooding. Several houses on Wheatley’s Ait, on the Creek side, received compulsory purchase orders and were subsequently demolished. We have previously written about the old scrap book with hand drawn maps and collages of the island. One of the pages clearly shows Willowdene on the map of the island.

Willowdene was opposite Cubiculo, which we have featured in Sunbury Matters before.

What’s more, we discovered that the owner was known as Wireless Wally, because he had a shop fixing wirelesses at 67 Thames Street and Dennis Brock used to buy his bits and pieces to make crystal radio sets from him. How amazing to piece the past together. We found the house and we found more out about the owner. Our Australian contact was delighted. .