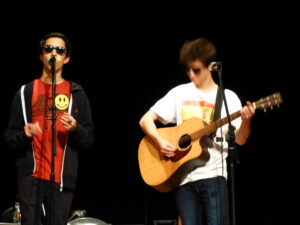 Songstar is now in its third year. As someone who is not musical, it was all the more remarkable to hear both great performances but also to know that the songs had been written by the students themselves. Credit too to Rob Lever who clearly is an inspiring music teacher and helped students fine tune their songs. Thamesmead has some history for producing musical talent. Drummer of You Me at Six, who are performing at the Reading Festival this year, is Dan Flint who was at Thamesmead.

The competition this year attracted a record 18 entries, the youngest Natasha White from Year 7. One year older Molly entertained with her song ‘Teenagers’ inspired by her nagging mum. This year saw the first synthesised song with ‘Atmosphere’ performed by Finlay Parker and Alex Dexter, looking every bit the little DJ’s of the future. Little rock stars Take Back Tomorrow jumped around the stage like pro’s. We loved the hauntingly beautiful ‘Running Back’ (which came third) and smiled at smitten Jordao Ranshaw who was performing ‘Now that I Want You’ for someone in the audience…

Boaz Dopemu, who has already been on stage in the West End as baby Simba in the Lion King, got the audience clapping to his song ‘Stars’ and picked up second place. But the song of the evening, voted by the audience was in fact last year’s winners, the cheeky chappies Alex Sharma-Drake and Reuben Creasey. Their ‘Bailar, Bailar’ had well written lyrics, was well sung (partly in Spanish indeed!), excellent guitar playing, made us laugh and even featured a castanet piece!

Songs are available to download on i-Tunes this year. Just search Songstar 2014…Hurrah!

Just around the corner from Shepperton Studios is the beautiful church of St Mary Magdalene, Littleton. It was founded in… END_OF_DOCUMENT_TOKEN_TO_BE_REPLACED