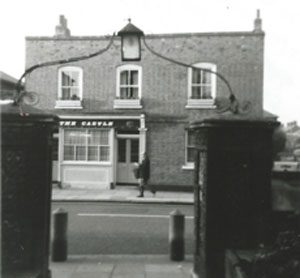 The Castle, which stood at the top of Church Street opposite the gates of the parish church, was another of Walton’s oldest inns. It is believed to have been established in about 1740, probably in a newly-built building, and was rented by Thomas Cobbett for £12.00 a year.

In 1821 it was described as a brick house with a coach-house, stabling, yard and garden situated in the best part of town with coaches passing daily to and from London. At this time it would have had a pitched roof but this was damaged by a bomb in World War Two and replaced by a flat roof concealed by a brick parapet. It was in 1821 that the inn was purchased by John Farnell, an Isleworth brewer, and in 1886 the ownership passed to Isleworth Brewery Co. Ltd. It became the property of Watney Combe and Reid in 1924.

The Castle was demolished in February 1973 after closing a year earlier and St Clements House, a residential development, was built on the site. Investigations made during demolition did not verify a local legend that an underground passage ran between the pub and the parish church.
References: Inns and Taverns of Walton and Weybridge; A.G.Martin. Walton and Weybridge Local History Society 1999. Photos: The Castle in 1971 and St Clements House 2019 both by the author.