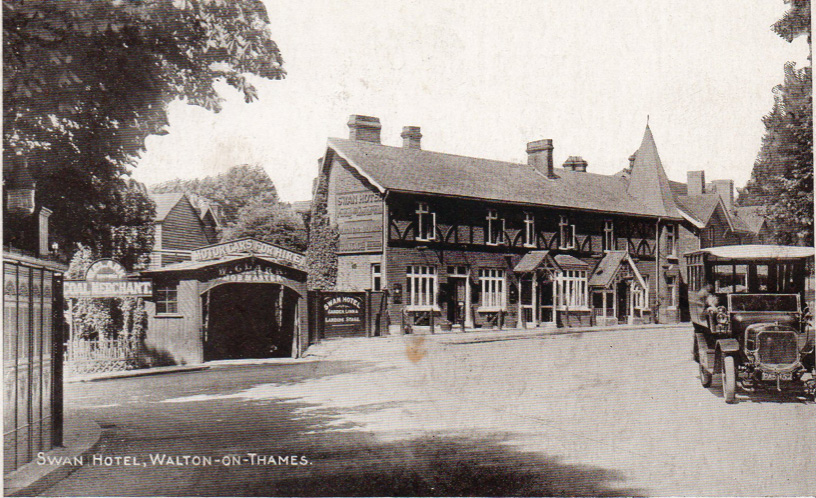 The Swan Hotel in Manor Road stands on a site which has been an inn since at least 1769, although the present building dates from the late 1870s.

It is of brick and ‘half-timbered’ construction, with a decorative spire at the eastern end. The photo above dates from c1910, and shows that in place of the current car park to the left of the building, were the premises of W. Clark, coal merchant, who also hired out motor vehicles, still quite a novelty at the time.

A motor bus is parked opposite, although it is unclear if this belonged to Clark. The gates between the Swan and Clark’s advertise the pub’s garden lawn and landing stage, so clearly the pub had its own access to the river, alongside the old Walton wharf, where Mr. Clark’s coal would probably have been unloaded.

Inside the hotel had a Public Bar, Private Bar and Lounge, and served food. Both before and after the First World War, film actors from the nearby Hepworth Studios came here for lunch. Two of them, Stuart Rome, who later went to Hollywood, and Lionel Howard, actually lived at the Swan for several years.

There is another show business connection. The famous American composer Jerome Kern dropped into the Swan in 1909 whilst touring the UK. He was very taken with the landlord’s daughter, Eva Leale, so much so that they were married at St. Mary’s church, Walton on 25th October 1910. Thereafter the couple stayed at the Swan whenever they were in the country.

Kern was one of the most important theatre composers of the early 20th century, writing more than 700 songs, many used in shows or films, including such classics as “Ol’ Man River”, “Can’t Help Lovin’ Dat Man”, “A Fine Romance”, “Smoke Gets in Your Eyes”, and “The Way You Look Tonight”. A blue plaque commemorating the connection with Jerome Kern was unveiled at the Swan in 2010.

‘The Story of the Queen Mary Reservoir’ by Nick Pollard is the subject of the next meeting of the Sunbury and Shepperton Local History Society. The meeting takes place on Tuesday 16th October at Halliford School in Russell Road, Shepperton, starting at 8pm. All welcome, admission £2 for non-members.