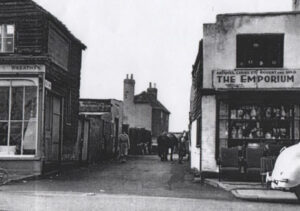 When Jack Swabey began work at the forge aged 13 in 1908, his father had already been the village blacksmith and farrier for decades. Before that his grandfather had been the bailiff at Vicarage Farm in Halliford Road. Jack was born in the forge cottage on the opposite side of the lane (also seen in the photo), and started work after leaving the school in School Walk nearby.

He recalled working from sunrise to sunset, seven days a week, for which he took home £2 5s (2.25p) a week, and charged 4 shillings (20p) for a set of horse shoes. They had only hand bellows and no electricity or gas for heating the furnace or welding. Beside shoeing horses, which to be accurate is done by a farrier, they also did blacksmithing, which involved making wrought ironwork, gates, chains, etc, mending tools and even fixing lawnmowers. The forge was always popular with children who would stop off on the way to or from school to see the work going on –particularly on cold days when the heat of the furnace was very welcome! In the summer, there would be lemonade or ice creams waiting for them. It was the last remaining forge covering a wide area stretching from Chertsey and Walton as far as Hanworth, and on busy days, before local horse shows for example, there could be up to twenty horses waiting to be shod.

Jack had three sons who all learned the trade, but none wanted to carry on the business. When the forge closed in the 1960s to make way for the expansion of the adjacent Page Engineering, Jack briefly reopened in Hanworth, but then retired after 50 years of hard but rewarding work. He died in 1971.

‘Willow – a local industry’ by Sally Fletcher-Pemberton is the subject of the next meeting of the Sunbury and Shepperton Local History Society. The meeting takes place on Tuesday 17th March at Halliford School, Russell Road, Shepperton, starting at 8pm. All welcome, admission £2 for non-members.