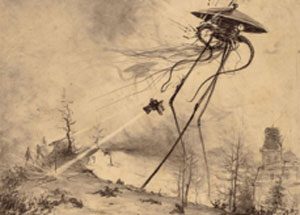 To summarise, the Martians invade earth by means of ‘cylinders’ fired by a giant gun from their planet, the first of which lands at Horsell Common, near to where H.G. Wells was living in Woking. The Martians unleash giant tripod war machines from these cylinders, armed at first with a heat ray, but later with even deadlier poison gas (a foreshadowing of the use of gas in warfare in the First World War).

The Martian felled by artillery at SheppertonThe unnamed narrator of the novel lives in Woking, but flees the destruction of the Woking area towards the direction of London, reaching the Thames at Weybridge by the mouth of the River Wey. In Chapter 12, worryingly entitled ‘What I saw of the destruction of Weybridge and Shepperton’, he writes: ‘On the Shepperton side was an Inn, with a lawn, and beyond that the tower of Shepperton Church -it has since been replaced by a spire – rose above the trees’.

Wells was clearly taking a slight liberty with geography here – he would have been looking towards Dunton’s boatyard (now Nauticalia) from this location, and of course there was no Inn there. He was probably thinking of the King’s Head at Church Square, further downstream, which had a lawn stretching down to the creek at the time. Next the Martian war machines appear from the direction of Chertsey Meads, and one is destroyed by a battery of cannon on the outskirts of Shepperton: ‘It struck the tower of Shepperton Church, smashing it down as the impact of a battering ram might have done, swerved aside, blundered on, and collapsed with a tremendous impact into the river out of my sight.’ After escaping the Martians at Shepperton, the narrator drifts downriver to Halliford and Walton in an abandoned boat without oars: ‘Halliford it seemed was quite deserted, and several of the houses facing the river were on fire’ and a little later ‘At last, as the bridge at Walton was coming into sight round the bend, my fever and faintness overcame my fears, and I landed on the Middlesex bank’. This would clearly be at Thames Meadow. He then falls in with a curate from Weybridge who has had a breakdown after events there, and they make their way towards Sunbury. As they ‘hurried wearily and painfully along the run that runs northward out of Halliford’ (i.e. Upper Halliford Road), ‘the two Martians halted, the nearer to us standing and facing Sunbury’.

After a long series of setbacks for humanity, the Martians are eventually defeated – but no more spoilers from me!