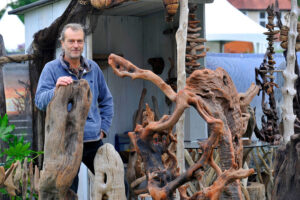 Nonetheless, I know that everyone would agree that he was a ‘one off’ – totally unique, with the kindest, most gentle nature; a calm and modest charisma, with a naughtiness, that everyone loved – he made you smile and feel very special.

Nigel was born in New Zealand and remained the ‘hippy kiwi with the pony tail’ despite having lived in England for well over 30 years. But he loved it here, so when it came to rugby matches, he wasn’t particularly fussed whether England or New Zealand won; obviously, as long as it wasn’t Australia!

He particularly loved Sunbury; the odd discussion we had about moving, was very quickly quashed, with Nigel saying, “But, there’s nowhere as pretty as Sunbury village and our stretch of the river.” And, that was that, discussion closed.

He loved the whole community of the village and loved being such an integral part of it all himself; Sunbury had truly become home to Nigel. Being in the regatta was one of the highlights of Nigel’s year and I don’t think he missed a single year since we moved into French Street in the late eighties, steering many a pub Dongola to victory!

But alongside all this was an extremely talented designer, with the courage and self-belief to go it alone. Nigel set up Sage Design in his mid-twenties and developed an impressive client list over the following fourteen years, but when design became digital, he decided to hang up his commercial pantone pens and begin his next adventure, Woodenzone.

His love of driftwood had begun when he was a child, but he had never lost sight of his desire and vision to bring this driftwood back to life.

So from 2001, Nigel went back to his homeland every year, to scour the wild beaches of New Zealand’s south island for the perfect pieces; his love of driftwood and his passion for creating unique sculptures and furniture never wavered.

Sadly, on the morning of 12th December last year, during what was to be Nigel’s final visit to New Zealand, he phoned us with the devastating news that he had lung cancer and from that second, our lives changed forever.

During the months that followed, everything sped along too quickly, but he never complained or felt sorry for himself and right up until the end, he thought about us, his family.

As a son, brother, cousin, nephew, friend, husband and father he is so loved and will be so greatly missed every minute of every day.

His beauty, goodness and decency lives on through his amazing children of whom he was so proud.