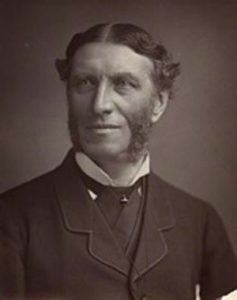 Matthew Arnold was the son of the great educationalist Thomas Arnold, the famous headmaster of Rugby School who is acknowledged as the founder of the modern public school system. Matthew was to become celebrated in his own right as a poet, critic and educational reformer.

He was born in Laleham in 1822, prematurely as a result of his mother falling from her pony near the family home in The Broadway. He left Laleham aged six, when the family moved to Rugby, but was to return two years later to become a pupil at his uncle John Buckland’s preparatory school in Ferry Road. Ironically, Matthew’s educational achievements were less than expected, but he eventually gained a degree at Oxford. He seems to have retained a great affection for Laleham and revisited often.

After university, he became Private Secretary to Lord Lansdowne, Lord President of the Privy Council, but wished to marry and needed a regular salary. He therefore took up a place as one of Her Majesty’s Inspectors of Schools, a post he held for many years and, like his father, one in which he was to play a great part in reforming education.

He was a notable poet, and was elected Professor of Poetry at Oxford in 1857. Although perhaps less well known today, at the time he was highly regarded as a poet and at one time was ranked second only to Tennyson and Browning. Perhaps his best known poem today is ‘Dover Beach’.

He later settled at Cobham with his wife Lucy, and they had six children, but three of their sons died young and were buried near the old family home, at All Saints churchyard, Laleham. Matthew himself was to join them in 1888. He had a heart attack while in Liverpool, running to meet his daughter’s ship which was bringing her back from America where she lived with her husband. Notable people who attended his funeral included the poet Robert Browning and the writer Henry James, while the Poet Laureate, Lord Tennyson, sent a wreath.

Two new Church secondary schools (for boys and girls) were built in Kingston Road, part of the old parish of Laleham, in 1948, and were most appropriately named after Matthew Arnold.

The Sunbury & Shepperton Local History Society will have a selection of old photos of the area on show at the Shepperton Village Fair on Saturday June 8th. Do come and see our stand in the large craft marquee.