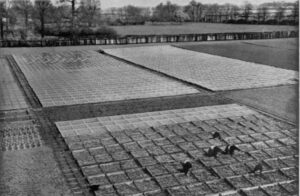 This photo shows what were known as the French Nurseries, Upper Halliford. The name does not derive from the nationality or even the name of the owner, who was a Mr.

Yates and lived in Upper Halliford Road. It refers instead to the method of raising crops under glass frames, which were confusingly sometimes called ‘Dutch Lights’. This practice originated in France, but was later adopted by the Dutch growers before being exported to England. It was useful for raising seedlings and for bringing on crops early, when the weather would otherwise be unsuitable and when prices were consequently high.

By the time this photo was taken in September 1940, the nurseries at Halliford had been operating under this system for over 30 years. Of course it was also wartime, France and Holland had fallen to the Nazi invaders, and the Battle of Britain was raging in the skies above South East England.

The supply of fresh vegetables from the continent had been cut off and it was imperative that food production was maximised. The crops grown under glass were lettuce, carrots, turnips and cauliflower. Raised under glass but then transplanted into the open ground were leeks, radish, celery, tomatoes, marrows, French and runner beans, spring cabbage and salad onions.

Another major factor in the success of the Halliford Nurseries was the use of artificial irrigation, both to boost growth and to prevent plants suffering in periods of dry weather. A system of pipes connecting up oscillating sprinklers was in use, developed by British Overhead Irrigation Limited which was based round the corner at Halliford Green. Mr Yates was also a director of this company. Note also the light railway track laid around the site to carry crops to the packing shed.

By the 1960s the nursery had switched to the growing of roses, and is now Squire’s Garden Centre. At the rear of the site you will see an old brick water tower which is the only surviving clue to its former use.

‘Victorian Gardens’ is the subject of the next meeting of Sunbury and Shepperton Local History Society. The talk, by Cherrill Sands, takes place on Tuesday 15th January at Halliford School, Russell Road, Shepperton, at 8pm. All welcome, admission £2.