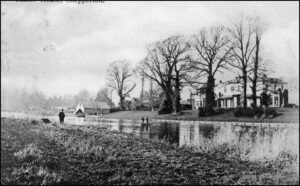 I am indebted to Bill Lindsay, great-great-grandson of William Schaw Lindsay, Lord of the Manor of Shepperton from 1856 to 1877, for the inspiration for this month’s article. Bill is currently transcribing W.S.Lindsay’s diaries, which are kept at the National Maritime Museum in Greenwich because of his career as one of the country’s largest ship owners. Bill came across the following interesting entries relating to a major flood which took place in early 1877:

“January 10th – Water still rising and it is now 6 inches deep at our lodge gate, and is close up to the steps of the Hall door. We must now punt from the lodge to the station. At the Lords Bridge it is fully 7 feet above the crown of the road, and the water extends close up to the school house – the water is already as high as it was in the floods of 1852.”

Here Lindsay is referring to the lodge at the entrance to the Manor House grounds on Church Road – the lodge still stands today. The depth of water over the crown of the road – seven feet – seems incredible by today’s standards. By comparison, the road flooded in this area in 2014, but only by a few inches, although that was sufficient to carry the water up to the Three Horseshoes at the end of Shepperton High Street. The ‘school house’ referred to is the old National School at the lower end of the High Street, which is now the ‘School of Spice’ Indian restaurant., and Lord’s Bridge stood where the bypass (Renfree Way) now begins. If Lindsay’s figure of seven feet is even close to being correct, the extent of the floods in 1877 must therefore have been enormous.

Lindsay adds an amusing anecdote also related to the floods:

“January 7th – Today our Rector Mr Martin came here to ask me if I would invite the Archdeacon and himself to dinner on the 21st inst when he is to be inducted into his charge. He has bought the living for I learn £9000, a very high price, so, I suppose he cannot afford very well to give the Archdeacon dinner.” The newly appointed Rector was Walter Martin, who stayed until 1890.

“January 11th – The note on the following page is from the Archdeacon – I tell my parson in reply that if the floods do not go down he must postpone the induction as it would never do to fetch the Archdeacon in a punt.”
“January 12th – By a note received from the rector this morning he says he wishes to call and thank me in person but that he cannot reach the Manor House from the Rectory on account of the floods without climbing over the division wall between us, which would be quite as undignified as the Archdeacon going to his induction in a punt!”

The subject of the next meeting of the Sunbury and Shepperton Local History is ‘The History of London Irish RFC’ by Nigel Scott, on Tuesday 20th March at Halliford School, Russell Road, Shepperton, at 8pm. All welcome.