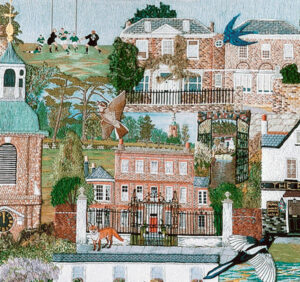 I was greeted at the Embroidery Gallery with a huge hug and smile from volunteer Pauline Tregidgo “Come and see this. It is amazing!” She took me into the gallery where the exhibition to celebrate the 10th anniversary of the gallery had just opened.

The walls of the gallery have been covered from top to bottom with specially made panels which tell the story of the concept to execution of the millennium embroidery and finally the opening of the gallery. The story is one of great creativity and determination as well as a huge community effort. I was quite moved. I wish I had been part of this project which is a legacy for future generations. It is the ‘Bayeux tapestry’ of our day.
In 1995 communities were starting to think about ways of marking the millennium.

David Brown had several ideas – some better than others, he tells me! The one that stuck was to create a large embroidery to celebrate the buildings, businesses, parks and people of Lower Sunbury. A final design was drawn up by David Brown, John Stamp and Robert Shaw, and embroiderers were sought. The wonderful thing with this project is that it involved so many people in so many ways. The 147 embroiderers ranged from 18 years old to 92. Some had no experience at all. They were each given a piece to do, outlined on tracing paper, and with a sketch as guideline. Pam Judd, who had taught at the Hampton School of Needlework, was chief embroiderer and guide to the less well experienced.

Such was the local interest in the embroidery that there was a series of talks, events and regular progress exhibitions in the Parish Hall. The embroidery did not have a home of course at this time, so David Brown’s house in Thames Street was set up as Embroidery HQ and much of the work was done there.

At the exhibition you will see a hand written diary by Margaret Stanley who documented the whole process. The drawings show the work in progress and the people involved are easily recognisable. It is a fascinating insight to the process.

The finished 25 foot long embroidery was exhibited at the House of Commons and attracted great admiration from MPs and celebrities. What pride the group of volunteers must have felt when the Queen accepted an invitation to come and see it for herself. A temporary exhibition area was set up around the Lendy Lion in the Walled Garden and by all accounts it was a splendid day. The Queen was so enthralled that she stayed 30 minutes longer than her schedule had anticipated.

The embroidery now needed a permanent home. Spelthorne council realised what a gem it was so gave permission for the gallery to be constructed in the corner of the Walled Garden. Fund raising commenced in earnest including a ‘sponsor a square’. A grid was designed, dividing the embroidery into 1026 2”x2” squares each of which was sold for £5.

The Friends of the Embroidery was set up as a fund raising group in 2005 for a final push. In all £425,000 was raised through corporate and individual donations and events as well as a grant from the Arts Council of England and money from Spelthorne Council. It was a huge community effort, but what a home the embroidery now has and what an impact it has made.

There was a party to mark the anniversary recently. The sun shone in the early evening and the lavender scent wafted in the breeze. As well as local dignitaries, many of the original volunteers and embroiderers had been gathered. Robert Shaw gave a speech, thanking all those who had contributed to the legacy, too numerous to mention here.

I know I was not the only one to feel rather emotional about the whole project, as well as a tinge of regret that Sunbury Matters had not been up and running in the lead up to the millennium. I would have been so proud to cover the story, not to mention try my hand at embroidery for this legacy of Sunbury life. There is huge pride as a community to have something so special in our midst.

The gallery itself continues to be the community hub, running workshops, exhibitions and concerts as well as offering wall space to schools and neighbourhood groups. I hear that there are discussions about extending it to create a larger space to open up new possibilities. Watch this space.
The exhibition is on until September 11th. Gallery opening times 10am-4pm, Tuesday-Sunday.

You might like to join in the Picnic in the Park, organised by Friends of the Embroidery which will be on September 10th from 18.00. Bring a picnic and bop to the 60’s All Stars. All raising much needed funds for the gallery. Tickets in advance from the Embroidery Gallery.