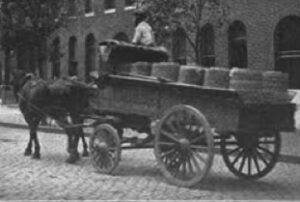 London depended on its surrounding countryside for fresh food and animal fodder. In return, the growing city exported huge quantities of manure to 50,000 acres of farmland in adjoining counties. This trade supported intensive horticulture (nurseries) on the loam soils and brickearths that covered gravels in the parishes of Shepperton and Sunbury.

The collection, marketing and transportation of manure had become a well organised and profitable business. City manure came in various forms. Middleton estimated that sweepings from 3000 acres of streets and squares, the dung produced by 30,000 horses and 8000 cows, and night-soil from 700,000 inhabitants amounted to 500,000 cartloads (each weighing up to 2 tons).

About half of this was spread on agricultural land in Middlesex. With regret, however, Middleton notes that “…..ninety-nine parts in every hundred of the soil of privies, is carried by the common sewers into the Thames……… a very great loss to agriculture………” Until the 1760s, city wards had employed sweepers to remove horse (and other) manure and waste products from the streets; thereafter, street cleaners paid a levy for the privilege of 3d per cartload, increasing to 12d in the 1780s and averaging 2s in the 1790s!

Established manure traders heaped waste material into dunghills to accelerate its decomposition. These were ‘bottomed’ on pond mud and road scrapings to prevent loss of ‘liquors’ and encased with ‘cleansings’ from ditches. Sale price per cartload was determined by the number of horses used by buyers. Dry ‘street-slop’ sold, at that time, for 1s per horse; and dry night-soil from privies at 1s 6d.

Vendors at riverside ‘dung wharfs’ charged by the ‘bargeload’ (up to thirty tons) according to distance and tidal reach. Transfer charges (even as back freight) on turnpike roads averaged 2s per mile per cartload; by barge, the equivalent cost was 6d. It required 20-24 loads of fermented dung (cold manure) or 36 loads of fresh dung (hot manure) to fertilise an acre. Baird claimed that gardeners (nurserymen) manured land twice in every three years; farmers once. Evidence from correspondents indicates an average annual fertiliser cost of between £5 and £9 per acre depending on proximity to the Thames and cultivation practices.