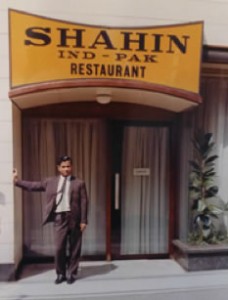 In 1957 18 year old Mahmadur Rashid came to the UK from Pakistan to find his destiny. It had been an adventurous journey. With a one way ticket, he took a 28 seater plane from Dakar which had to make an emergency landing when the radio gear caught fire. His journey to London ended up taking 4 days, with ensuing delays and he landed late at night with only an address in Bayswater on a piece of paper. So started the adventure. He found work in a factory, helping out at his friends restaurant in Bayswater at night, paying his way always.

This was the routine until 1960 when he was offered help to open his own restaurant in South Wimbledon with another chef. Merton High Street beckoned but Sunbury would not be far behind, as Mr Rashid saw an opportunity for expansion in the early 1960’s. Asian food was set to shake up the taste buds of the British public.

In the sleepy village of Sunbury on Thames, changes were afoot. Thames Street, which had been the commercial centre of the village, was gradually giving way to the new development in The Avenue round the corner. Brookers, the old hardware shop had moved to the new commercial centre and no 67 was set to become a Greek restaurant. The lease had been acquired, and permit for change of use was already secured, but the Greek restauranteur had family issues, so never opened. Instead Mr Rashid could take over, with many of the planning headaches already sorted out.

The Shahin opened as an Ind-Pak restaurant and there were soon queues down the street to get a table. The White Horse and The Phoenix provided the perfect waiting rooms for the crowds who came from far and wide. The nearest alternative Indian restaurant was in Kingston. Mr Rashid replicated the menu from the Bayswater restaurant when he launched. He remembers a curry dish being 3s/6 (17.5pence in new money) and a pillau rice was 1s/6 (7.5pence). Needless to say, as the palate of the public had to get used to new flavours, the most popular dish was a mild korma. But nothing changes and people were soon daring to taste more spicy food. The Vindaloo soon found its place!

The Shahin restaurant was known for its array or rubber plants which thrived there. They remained a fixture for many years, along with the fish tank and flock wallpaper.

The restaurant soon became so popular and busy that Mr Rashid had to look for staff. One of his cousins was at that stage living in Birmingham, working in a factory. It was during the crisis of the 1970’s and the introduction of the three day week. Bad news for many, but it meant the cousin was at liberty to come and help out in Sunbury, so that is what happened.

New openings followed in Dorking, where the Curry Garden still exists, (although under new owners). Also the Hussein restaurant in Weybridge, initially in Baker Street, before moving to Church Street.

While The Shahin is now managed by nephew Shubin Haque, you may think the Mr Rashid is enjoying taking it easy. None of the sort! He is a key member of the Bangladeshi community, Trustee and Chairman of both the Surrey Islamic Trust and the Sylhet Sadar Trust which supports colleges in Bangladesh, ensuring access to an education for many.

As for The Shahin itself, it is still going strong as ever and the restaurant has just undergone a facelift. No rubber plants, but there is a nod to the old aquarium, and very smart it is too!