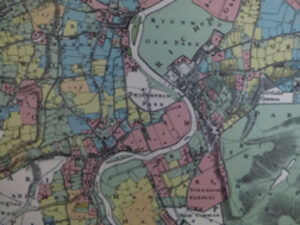 I recently visited a fascinating exhibition put on by the Environment Trust about the forgotten history of market gardening in South West London entitled “Feeding London”. It is on at the library of the Royal Botanic Garden, Kew and is well worth a visit.

The population of London was starting to boom in the 19th century. From a population of just over 1 million in 1801, it had risen to 6.5 million a century later. Food production needed to keep up.

During the same period, developments in market gardening, like more intensive cultivation, introduction of growing in greenhouses and also the arrival of the railways had brought new possibilities in food production and distribution. Middlesex was now within reach of the markets where crops were sold. And so it was that the county became such an important area for feeding London. A map from around 1800 shows land use from Richmond to Hampton along the river as virtually all dedicated to agriculture. The area was described as “the great garden…on either hand for several miles for the supply of London”. Families established businesses to keep up with the demand, many inter-marrying to strengthen their dynasties, and most passing their business on through generations.

Land in Sunbury and Shepperton was also largely being cultivated at that time and there are remnants of orchards in many back gardens in our villages. The river bank itself was important as the willows and osiers were used to make baskets for carrying fruit and veg to market.

Agriculture was the largest employment in Middlesex at the time, even taking on foreign seasonal workers at peak times.

In the late 19th century however, developments in refrigeration meant more competition from the continent as goods could be transported from further afield so there was pressure on local growers to develop methods and varieties. By 1939 Britain was in fact importing 70% of the food it consumed. With WW2 however, all imports ceased, food was rationed and Britain was back to growing its own. The allotment seen here is non other than the Tower of London moat!

The legacy of those nursery dynasties in this area linger on. The Poupart family (descended from French Huguenots) bought Blackmore Farm in Twickenham in 1874. Several generations later it was sold to a certain D J Squire! It is now the site of Squire’s Twickenham HQ.

Sadly by the 1960’s bulk refrigeration and cheap air freight meant competition for Middlesex nurserymen and the demand for land to house the every increasing population of London meant that market gardening business went into decline.

It seems that some things never change!

“Feeding London” exhibition runs until December 23rd 9am-5pm.
The Library, Royal Botanic Gardens, Kew. Go to the Herbarium reception desk.
Free admission. Fascinating to visit this place in its own right too!