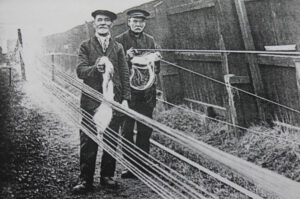 For many years before the coming of the railway to our area in the mid nineteenth century, the main way of moving around bulky goods was by river. The roads were generally in bad condition, being unsurfaced and turning into quagmires after heavy rain, and heavy wagons would sink into them. On the river, and particularly after the locks and weirs were built in the early 19th century, it was far easier to move agricultural produce downstream to London, and return with manure for the fields.

Barges called in at wharves at all the local riverside villages. In Sunbury the wharf was opposite St. Mary’s Church, and at Shepperton it was at the Ferry Square. These barges were at first towed by gangs of men called ‘halers’, but later by one or more horses. Naturally there was a great need for long towing ropes, and works were set up to supply this requirement.

These ‘rope walks’ as they were called, consisted of a long, straight enclosure along which the individual strands of the rope could be stretched. A rope maker would then walk along, twisting the strands together into a rope of the required size as he went. Sometimes there would be a rudimentary roof over the rope walk, but often in the smaller works the process would be carried out in the open air.

Although they have long disappeared, the rope walks in Sunbury and Shepperton can still be located by footpaths which bear the name. In Sunbury, the Old Rope Walk runs from the Avenue across to French Street, following the line of an old brick wall which may originally have had a simple shelter erected against it. Sadly we have little information about the business, although a trade directory of 1839 names James Tidy as a rope maker, as well as a maker of mats and baskets, and the rope walk does appear on the 1848 Parish Map.

The Shepperton rope walk also appears in the 1839 trade directory, when Mrs Tilleard is listed as a rope maker. No doubt she was the wife of James Tilleard who ran the Red Lion pub in Lower Halliford. In the 1861 census, the six men who gave their profession as ‘rope maker’ ranged from 14 year-old George Hyatt to Isaac Pocock, aged 73. The 1876 Ordnance Survey map shows the rope walk stretching from the end of Glebeland Gardens, almost up to Green Lane (i.e. parallel to Broadlands Avenue).

The footpath which is now called the Rope Walk runs at a right angle to the actual rope walk, between the end of Glebeland Gardens and Manygate Lane, and the cottages still existing off Glebeland Gardens were built for the workers at the rope works.

The coming of the railway to Sunbury and Shepperton in 1864 signalled the beginning of the end for both rope walks, as trade swiftly shifted from the river to the new and faster mode of transport, doing away with the need for towing ropes.

‘The Battle of Waterloo’, which took place 200 years ago in 1815, and in which local men are known to have taken part, is the subject of the next talk hosted by the Sunbury and Shepperton Local History Society. The talk by Rupert Matthews will take place on Tuesday 13th October at Halliford School, Russell Road, Shepperton and commence at 8pm. All welcome, £2 for non-members of SSLHS.