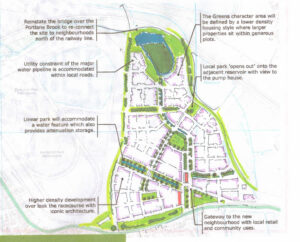 We’ve made it all up, apparently. We’ve been called liars and fantasists. It’s all a figment of our fertile imaginations. One of our local worthies complained to the County Chief Executive that “this rumour/belief is so insidious” that Spelthorne hosted a meeting in February to try and scotch it, “but it will not die.”

You may have been among the 250-odd people who attended that meeting. If so, you will remember the stream of denials from the podium, despite the evidence in their own hands in the form of the Timeline we produced, which showed the extent of the Council’s involvement in the plans for developing Green Belt at Kempton Park. (This Timeline and all the background documents can be seen at www.keepkemptongreen.com – search for “Timeline” in the search facility at top left.)

They deny encouraging the scheme. They deny even knowing any details about it, despite meeting after meeting after meeting with The Jockey Club and their consultants. “NO PLANNING APPLICATION HAS BEEN RECEIVED” is the mantra they repeatedly hide behind. Quite so. No-one has ever said a Planning Application HAS been submitted. But that is irrelevant, as everyone knows.

So here’s another piece of “fiction” for them. (Honestly, the depths we will stoop to …)

The plans are extracts from a brief for the architects competing to design the Kempton Park development. They date from Redrow’s involvement as The Jockey Club’s preferred house-builder. They show concepts rather than final designs, but are enlightening nonetheless.

Plan A gives an idea of how the dwellings could be distributed across the site. Higher densities on the south and west, larger dwellings on bigger plots to the east and north. Adding up the figures in the various areas gives a total number of units of between 1365 and 1967 – confirming the 1500-to-2000 range which has appeared in a number of other documents seen by Spelthorne Council. Plan B shows some of the features that could be incorporated. It is not really apparent from the main road quite how big this development will be. The eastern half of the estate is 102 acres in size. Walking briskly from north to south would take 20 minutes. In the words of Spelthorne’s then Head of Planning on 20 May 2013 “Suffice to say that they’re not looking at a small area of infill.”

The Council will, of course, deny seeing any of this. But if it is so easy for us to get hold of these documents, why does the Council find it so difficult. Are they not interested in what’s going on in their own Borough? If not, why not?