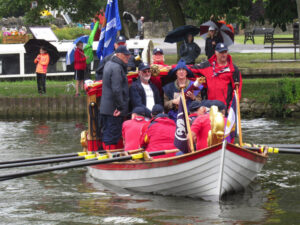 As many of you will know from my last article, June saw several commemorations locally of the 800th Anniversary of Magna Carta. My experience of the celebrations began on the evening of Friday 12th, with a reception at Bisham Abbey for Charter Bearers who had been nominated to carry a copy of Magna Carta in the River Relay from Hurley to Runnymede over the weekend. The Queen’s rowing barge Gloriana was moored there and we were lucky to have to chance to go on board. The workmanship is very impressive.

On the morning of Saturday 13th, I took part in the Spelthorne River Pageant, also commemorating Magna Carta, which travelled from Sunbury to Staines and included a couple of Dunkirk ‘Little Ships’ and the ‘jolly boat’ from the former Royal Yacht Britannia, which carried the Mayor of Spelthorne, Cllr Mark Francis. We moored up at Manor Park Shepperton to witness the raft race at the Village Fair (again with a Magna Carta theme, some very impressive rafts bearing castles, and even a medieval catapult!), and I spent some time at the History Society stand before travelling on to Staines for the ‘Barons Gathering’ event at the Lammas, which was also the destination of the River Pageant. A large crowd were entertained by a re-enactment of a medieval tournament, in commemoration of the one the Barons held at Staines in 1215 after meeting King John at Runnymede.

A drizzly Sunday morning saw me at the Oakley Court Hotel, near Bray, to join the Magna Carta River Relay in the rowing barge Jubilant. As a Charter Bearer I was wearing a uniform of a tabard with a rather strange looking felt hat (think Andy Pandy!). We were preceded by the Gloriana and accompanied by a number of other period-style rowing boats. Three of us took turns to stand in front of the cabin holding the copy of Magna Carta while waving to the spectators gathered along the riverbanks, and I had the last leg to the Brocas meadow at Eton, where a large crowd greeted us.

Climbing up the bank from the boat I was surrounded by photographers and hundreds of onlookers which was a fairly surreal experience! The Town Crier announced the handing over of the Charter to the next group of Charter Bearers, and after watching a playlet about the events of 1215, my wife Sue and I returned to Staines to host a ‘LiberTeas’ tea party at Spelthorne Museum.

Monday saw the big event of the Magna Carta commemorations, a celebration at Runnymede on the actual 800th anniversary, 15th June. Sue and I were fortunate to be invited with 3000 others to witness the celebrations, in front of Her Majesty the Queen. We watched musical and dramatic performances, including an excerpt from ‘the Freedom Game’ by Richard Stilgoe, performed by Surrey residents, and heard speeches by the Prime Minister, the Master of the Rolls, and the Archbishop of Canterbury.

The Queen unveiled a plaque, and the Duke of Cambridge inaugurated a new memorial, ‘The Jurors’ which consists of 12 decorated metal chairs representing the trial by jury which Magna Carta guaranteed. The Princess Royal rededicated the American Bar Association Magna Carta memorial, surrounded by American lawyers. Fortunately there were no accidents- the lawsuits would have been endless! The event ended with a flypast from a Spitfire, with a modern Typhoon, followed by the inimitable Red Arrows. In best British style, we all then had a mass picnic in brilliant sunshine.

I feel very privileged to have taken part in all these events, and a record of them will be placed in Spelthorne Museum.
The exhibition ‘Magna Carta and Spelthorne’ will continue at Spelthorne Museum until July 25th. Open Mon-Sat, through Staines Library. Admission free.