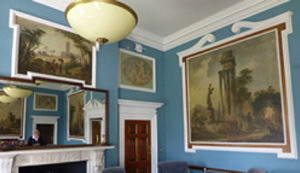 We have all passed Sunbury Court, the imposing building on Lower Hampton Road. But how many of us know much about it, let alone visited it?

Today it is the international conference centre of the Salvation Army, newly restored and extended. It plays an important role in the organisation as the college for officers who come from around the world to be trained. It is also the venue where the ‘General’, the International leader of The Salvation Army, is elected every five years. The equivalent to the Vatican, some might say.

Sunbury Court has a grand and chequered history. Built in 1723 this splendid home has played a part in the rich history of the upper classes, hosting lavish dinners and balls, to finally falling into disrepute, neglect and financial ruin in the early 20th century after a spell as a gentleman’s club. (The ‘ladies’ would apparently line up down the famous staircase waiting to be selected as companion of choice to the visiting gentlemen.) In 1918 the military used Sunbury Court for housing troops

The Salvation Army bought the empty and derelict building for a pittance in 1925. The recent refurbishment and extension resulted in a closure of 15 months. The centre reopened in April last year. There is now an accommodation block with 80 double bedrooms, a new conference centre and a magnificent conservatory restaurant overlooking the gardens at the back. The rooms boast stucco plasterwork, marble fireplaces, marquetry floors, a chandelier worthy of Versailles and a room of murals by Swedish artist Elias Martin dating from the late 18th century.

The Sunbury centre is a spiritual retreat and educational centre, welcoming delegates from all over the world: New Zealand, Liberia, even Papua New Guinea. A room in the building houses racks of warm coats which are lent to guests from warmer climes, arriving in the chill of a Sunbury November. They come for a six week period of training to become Officers (ministers), returning to their countries to lead the work of The Salvation Army. These are held four times a year.

The Salvation Army is one of the largest charities in the UK in terms of donations received and THE largest in the USA. We probably know it best for its Christmas appeals and brass bands. The work undertaken is a constant but low key affair, offering help and sustenance to the needy. It is the biggest provider of social welfare outside the government. The Sunbury Court kitchens prepare soup made from donated food stuffs, which is distributed from a centre in Hillingdon. There seems to be a recognition that there is limited engagement with the Sunbury community due to delegates coming from abroad and all over the UK but there is a desire to do more.

They have just agreed to be part of the Flood Plan for Sunbury Court Island in case of a future disaster. The centre is also opening to the public on June 6th between 2-4pm so you can have a chance to have a guided tour and a clotted cream tea! I would urge you to take advantage of this opportunity. They are opening their grounds for Sunbury Open Gardens on June 28th.