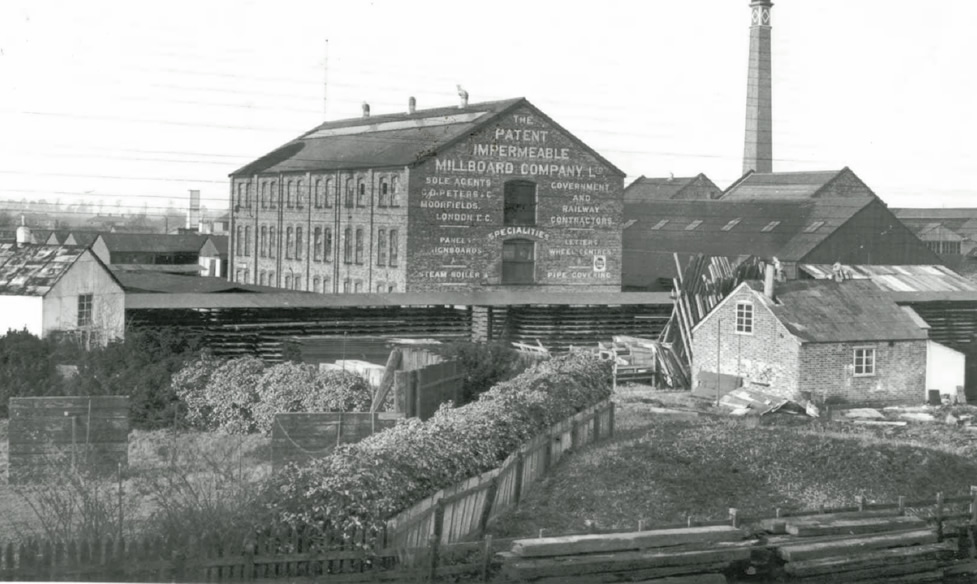 The photograph of the PIM works at Sunbury Cross dates from just over a century ago, and shows the factory originally established in the late 19th century by Frederick Walton, inventor of Linoleum floor covering.

Walton had established the world’s first factory to produce Linoleum at Staines in 1864, and went on to look for other uses of oxidised linseed oil, the rubbery material which was one of the main ingredients. The product he invented, he named ‘Lincrusta’. This consisted of deeply-moulded decorative wall panels, for use as a wall-covering, in a similar way to wallpaper.

The panels could not be rolled up like paper though, and needed to be supplied flat ready to be attached to the wall. This required a rigid material to support the panels, and the product developed was called Patent Impermeable Millboard, later (and more simply) known as hardboard. Walton eventually relinquished control of the company, and his manager Daniel Sutherland took over. Sutherland became a prominent member of Sunbury Urban District Council, and Sutherland Avenue off Green Street is named after him.

The factory was located in Hanworth Road, alongside the railway, and had its own sidings to allow the raw materials to be brought in, and the finished product taken away. Sadly like many factories in the area, the plant eventually closed and the Travel Lodge hotel now occupies part of the site.

‘The History of Staines Linoleum’ will be the subject of a talk by Nick Pollard to the Sunbury & Shepperton Local History Society, at 8pm on Tues 21st April at Halliford School, Russell Road Shepperton. All welcome, £2 admission for non-members.