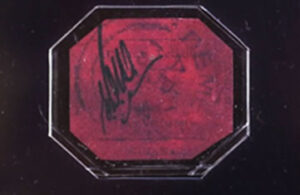 John Curtin has lived in Sunbury for 30 or so years. His is not your usual sort of office job. He is a collector and dealer in stamps – a philatelist. I was interested to hear recently that he had been asked to value a collection in America…a contact through his small ad in Sunbury Matters!

Many of us dabbled in a bit of stamp collecting when we were children. I remember my excitement at opening cellophane packages of pretty stamps from far flung places which I had bought for my own album. The reality is that most of those collections would be worth only a few pounds.

The collections of interest to John are those which date from before the 1960’s, stamps from the time of the British Commonwealth and the more obscure the country the better. Having said that, the most expensive stamp John has ever sold was a rare high value issue from Natal that he sold in the 1970’s for £38,000. Yes, you read that right. Stamps can be a very lucrative business. In fact a pre WW2 comprehensive Commonwealth collections of stamps do exceed gold in value at certain times!

The Penny Black, which most of us would know as the first stamp commercially produced, is not such a rare find as one would expect. Millions were produced in fact. These were made before the days of perforations, so the clerk would cut each one from a sheet with a pair of scissors, sometimes more carefully than others. A perfect Penny Black with four clear white margin all round might be worth £170.

The world’s most expensive stamp is the only surviving 1856 one-cent magenta stamp from British Guiana. It was first found by a 12-year-old Scottish boy living in South America, who chose it because he thought it would be nice addition to his collection. It has set a record every time it has been sold at auction. The stamp has in fact just sold at auction in New York and broken all records at $9.5million! It was bought by a phone buyer who wished to remain anonymous.

John was inspired to enter the world of philately by his late grandmother. He had done some buying of stamps on her behalf but she inspired him to take it up professionally after a period working in the City. He now attends auctions all over the world and exhibits at 35 stamp shows a year. He values around 200 private collections a year, but values a massive 20,000 lots for sale at auctions. It takes years of skill and experience to be able to spot the nuggets in such lots.

Another area of trade is in discounted stamps which although not recent collections, still bear a value. If you need a lot of stamps for business, it is worthwhile buying in bulk from John and making savings of as much as 26%.