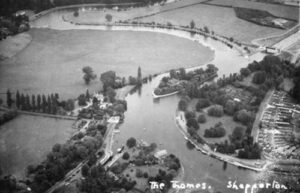 Desborough Island, which was created by the digging of the cut, looks remarkably open compared with today- the trees have grown considerably in the intervening 85 years or so. To the left of the cut is the broad expanse of Ferris Meadow, used for grazing cattle. Gravel was extracted from here in the 1960s, and the large lake subsequently created is now the home of the immensely popular Shepperton open water swim in the warmer months.

Between the meadow and the trees surrounding the tennis club on the Weybridge bank is the elongated shape of D’Oyly Carte Island, with the imposing house built by Richard D’Oyly Carte in the 1880s. He was the producer of the Gilbert and Sullivan comic operas and built the Savoy Opera House and the famous adjoining hotel off the Strand in London. The building was due to be a country annex to the hotel but no alcohol licence was granted, so it remained a private home. Perhaps he should have taken note of the previous name of the island – Folly Ait!

To the left of centre at the bottom is Shepperton lock, originally built in 1813 but rebuilt and enlarged immediately to the south in the 1890s. A passenger steamer lies just downstream of the lock. The cutting of the lock created the lock island, with its distinctive ‘D’ shape when seen from the air.

On the bank of this island nearest Weybridge, the large building was the slipway and works of the Thames Conservancy, who looked after the river, locks, weirs etc. from 1857 until 1974, when the Thames Water Authority succeeded it (since replaced by the Environment Agency). The building was subsequently sold off and is now the home of Weybridge Mariners, although it had to be rebuilt after a disastrous fire some years ago.

The next meeting of the Sunbury and Shepperton Local History Society is the Annual General Meeting, after which there will be a short talk on old photos of Shepperton and Sunbury. The meeting takes place on Tuesday 11th February at Halliford School in Russell Road, starting at 8pm. All welcome, admission is free.

Just around the corner from Shepperton Studios is the beautiful church of St Mary Magdalene, Littleton. It was founded in… END_OF_DOCUMENT_TOKEN_TO_BE_REPLACED