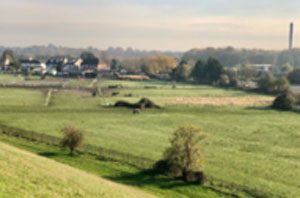 Charlton Village is just that…a village. Surrounded by fields, stables and horses, you can forgive yourself for thinking you are in the countryside (ok, ignoring the busy road that bisects it of course). But the village nature of this part of Shepperton is under severe threat and we all need to act now if we are to preserve the green belt and the rural feel residents so love.

With a hugely ambitious target to fulfil, the council is being forced to look at all land options. Even they have stated that they feel the number of homes they are expected to built is too dense for the borough. Central government has imposed a target of 603 homes to be built in Spelthorne each year over the next 15 years. Under the plan, Spelthorne BC encouraged landowners to contact them, with a view to redeveloping land, even if this was previously refused green belt land. Everything is up for consideration.  The Green Belt in Spelthorne covers 3320 hectares which equates to 65% of the total area of the Borough. Green Belt also includes the reservoirs in Spelthorne which represent 26.2% of the total Green Belt area which means finding space hard.

The proposed plan for Charlton Village is for:-

• Around 135 homes on the horse’s field just as you come into the Village from Shepperton
• A further 250 homes on the land by the old speed camera going towards the south on the Water board land. There also has to be a provision for a permanent Gypsy and Traveller

Site (G&T) initially for 15 families.
This agreement for land use will only be granted upon both site development, and the G&T site will NOT be for travelling gypsies that turn up periodically in Spelthorne.
Under the Council’s proposal at least 40% of the 385 homes must be affordable homes.
Both of the mentioned plots of land are in Green Belt but under the new rules and regulation development may be permitted if they satisfy the below five conditions.
To check unrestricted sprawl of large built-up areas
To prevent neighbouring towns merging into one another
To assist in safeguarding the countryside from encroachment
To preserve the setting and special character of historic towns
To assist in urban regeneration, by encouraging the recycling of derelict and other urban land.

Based on the above the Charlton Residents Association, with the support of our, Borough Councillor Maureen Attewell and neighbouring Borough Councillor Robin Sider BEM, are very strongly opposing this proposition and working with the Resident Association to stop this over development of Charlton Village representing an 85% increase in residents.

At the start of December there is Spelthorne Bulletin that will be delivered to every home in Spelthorne including the village. Do read the article on the Local Plan. It will give full details. Write or email before 6th January 2020 making your opposition to the plans for Charlton. Do also sign the Village petition that is being put together.  Please also read any local newsletters that will be issued. Let‘s be proactive in opposing this.

We know how hard it is to get out of our roads in the morning. This will only get worse with the extra traffic that this plan will bring. What about facilities like schools and health centres? Enough is enough!

Just around the corner from Shepperton Studios is the beautiful church of St Mary Magdalene, Littleton. It was founded in… END_OF_DOCUMENT_TOKEN_TO_BE_REPLACED