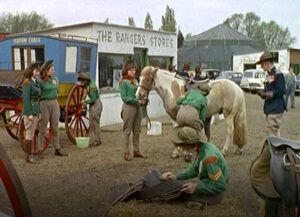 Readers will no doubt be familiar with the Horse Rangers, based in the old Tudor stables at Hampton Court, and may have seen them riding out to practice in Bushy Park. It’s perhaps less widely known that they were originally founded in Shepperton.

Businessman Raymond Gordon owned riding stables at the Century Club in Felix Lane, Shepperton (where the Holiday Inn now stands). He noticed that a lot of local girls were interested in horses but had no opportunity to ride, so he decided to start a group which would enable girls of any background to experience horse riding and to learn about caring for horses.

The Girl Horse Rangers, as they were first called, were established in 1954, and the cost was one shilling (5p) a week. The uniform of a green shirt, brown jodphurs (riding breeches) and a wide-brimmed cowboy style hat was relatively expensive (the jodphurs alone cost £5), but could be paid for in instalments. The group rapidly grew to over 100 girls and young women.

The picture above taken from a Pathe newsreel of 1959 show the Horse Rangers at their headquarters, which in those days had a real ‘Western’ feel about them. The odd looking conical building in the background was a wooden indoor riding school. I vividly remember this burning down some time in the 1960s, when the whole sky was lit up by it. The Pathe film also shows the girls riding in a field next to Fordbridge Road, with the gravel workings at what is now the Swan Sanctuary in the background.

Princess Margaret agreed to be Royal Patron of the Horse Rangers, a post she held up to her death in 2002. No doubt the Royal connection helped with the move to the stables at Hampton Court in 1963. Raymond Gordon himself died in 1983 aged 84, after which his widow Doreen became President until she passed away in 2002.

‘The Hampton and Kempton Waterworks Railway’ by Douglas Dick is the subject of the next meeting of the Sunbury and Shepperton Local History Society. The meeting takes place on Tuesday 19th March at Halliford School in Russell Road, starting at 8pm. All welcome, admission £2 for non-members.

Just around the corner from Shepperton Studios is the beautiful church of St Mary Magdalene, Littleton. It was founded in… END_OF_DOCUMENT_TOKEN_TO_BE_REPLACED