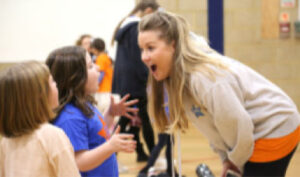 To meet Jess Edgar, principal of Stars Performing Arts and hear about the positive impact her performing arts classes are having on children is an uplifting experience. Enthusiasm radiates from this young lady. Her business is only in it’s fourth year and yet she has had such success already.

Less than a year after launching ‘Stars’, Jess won one of ‘Surrey’s Rising Stars Young Business Woman of the Year’ awards. Although very honoured, she confesses to never even writing a business plan when she launched. She felt she had spotted a need, was encouraged at the interest shown to her initial research and when her free taster session attracted 45 children, she knew her gut instinct was right.

She now offers classes to various age groups: 4-6 year olds make up the Mini Stars, Rising Stars cater for 7-9 year olds and her Youth Theatre Arts (YTA’s is for the older group. During the two hour classes, phones are not allowed. Children can be themselves, forget the outside world and simply have fun singing, dancing and performing. It is a great way of building confidence and is hugely positive for mental health. At the end of every class Jess calls out “Hands up if you are amazing” and the joy and happiness of the youngsters is clear.

Our younger generation is in the news a lot at the moment. The explosion of smart phones and social media apps have lead many youngsters deep into the world of self absorption and image, constantly striving to live up to ‘Instagram’ perfection and so often falling short. It can have devastating consequences.

So to get out and perform, to discover the joy of learning a dance routine or sing a song from a favourite musical unleashes endorphins galore. Performing arts is a great way of building the confidence anyone will benefit from throughout life. I remember as a child my own moment of fame and glory was receiving the drama cup for my performance as a singing dog!! Without a doubt drama contributed to the confidence I needed to do presentations during my career.

Just around the corner from Shepperton Studios is the beautiful church of St Mary Magdalene, Littleton. It was founded in… END_OF_DOCUMENT_TOKEN_TO_BE_REPLACED