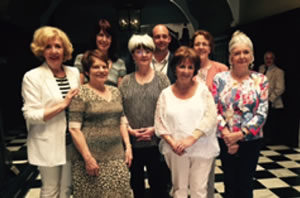 It may sound like a bizarre wish, but when I was a child I wanted to go to school at St Trinian’s. It looked like such fun. (Needless to say I wanted to be a languorous sixth former with long legs and sex appeal, whereas I probably would have been with the naughty fourth formers!). Well, recently I fulfilled my childhood ambition.
It is over 60 years since the original film, The Belles of St Trinian’s, was released.

There is a more modern version of the film released in 2007, but nothing compares to the original; Alistair Sim as the hapless Headmistress (also playing the part of her scheming brother), George Cole (RIP) as Flash Harry. It was a film full of fun and a sort of innocence – as well as just a little torture, horse theft, gin distilling and gambling thrown in.

Annabelle Heath, one of the original fourth formers (Maudie the Bookie in fact), reunited five of her St Trinian’s school mates at the time of the ‘new’ film’s launch. Since then she, Polly, Jill, Gillian and Diana have met on various occasions, most recently to visit Shepperton Studios, where the film was made. This was to mark the anniversary where it all started and to symbolically round the experience off. It was very special to have been invited to join them.

Many of the ladies had come with old mementoes from their time on set; photos, newspaper cuttings and even an original call sheet from 1954 showing the names of all the cast required in make-up and on which set at a particular time. It was fascinating to have this link with the past.

When the girls were filming back in the early 1950’s many were only around 12 years old, some much younger. It must be quite overwhelming for children of that age to be away from home. The girls remembered it as a fun time, although their schooling had to carry on between filming.

They would be collected by chauffeurs to go to the studios every day (not many people would have had cars of course), with their mothers attending as chaperones.

We walked around the Shepperton Studios and saw the original set where most of the filming had taken place. I could sense the happy feelings among the group that the trip down memory lane had brought.

And I survived the day without torture or torment!