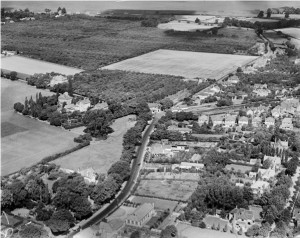 At this time, the High Street was actually called Highfield Road – it wasn’t renamed until 1939. In the middle of the photo can be seen the Railway Hotel, later known as The Crossroads, and now replaced by the Ballard Lodge retirement apartments.

Beyond the pub, acres of orchards, long since felled, can be seen. In the High Street itself, the building at the bottom of the view is the Parish Hall – the adjacent Barclays Bank wasn’t built until the 1930s, and the Library after World War Two. Opposite the Hall is ‘Fairleigh’, a large house surrounded by trees, which is now the site of Budgens. Otherwise the amount of open space is very noticeable – most of the shops at this time were in the lower end of the High Street, although the old Shack Café and Post Office can be seen between the Parish Hall and the crossroads.

Just around the corner from Shepperton Studios is the beautiful church of St Mary Magdalene, Littleton. It was founded in… END_OF_DOCUMENT_TOKEN_TO_BE_REPLACED