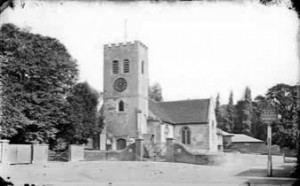 St. Nicholas Church, Shepperton, this year celebrates the 400th anniversary of the present building being consecrated.
A church has stood on or near the present site since Saxon times. In the early days the people of the village may well have been ministered to by the monks of nearby Chertsey Abbey, but by the time of the Domesday Book, compiled for William the Conqueror in 1086, a priest was mentioned at Shepperton.

Little is known of what the Norman church looked like. A distant view in the background of a view of Oatlands Palace, dated 1548, shows a spire. About 1605-6 this building became unusable due to severe floods, and indeed old accounts refer to the church being ‘swept away in an inundation of the Thames’. There is much reused timber and stonework in the present structure, so it seems likely that some of the materials were salvaged.

The new church was completed in 1614 and comprised a chancel, nave and side transepts in the traditional cross shape. The brick-built tower was added a century later. It is said that Queen Anne, patron of the Living, remarked that the church would be much improved by the addition of a tower, and the incumbent, the Rev. Lewis Atterbury, felt obliged to take note of this heavy Royal hint, and paid for most of the work himself. No doubt this is why the tower is so narrow, such that when a gallery was later added inside, the staircase to serve it had to be external, as there was no room inside. Another external flight of steps lead to a gallery in the north transept, known as the Manor House pew. Here the Lord of the Manor would have been able to take part in services, but elevated from his tenants. In 1877 a peal of 5 bells was added to the tower (it has since been augmented to 6). Much-needed vestries for clergy and choir were finally erected in 1934. Apart from an extensive re-ordering of the inside of the church in the 1950s, it has remained little changed since.

After 400 years the old building has its problems, and in particular the south transept needs major, and expensive, repairs. Please consider contributing to the restoration fund to ensure that this much loved building continues to play a part at the heart of our community.

To mark this anniversary, there will be a pageant of 400 years of Shepperton’s history, performed by pupils of St. Nicholas Primary School, at the Village Fair on Saturday 7th June at Manor Park.