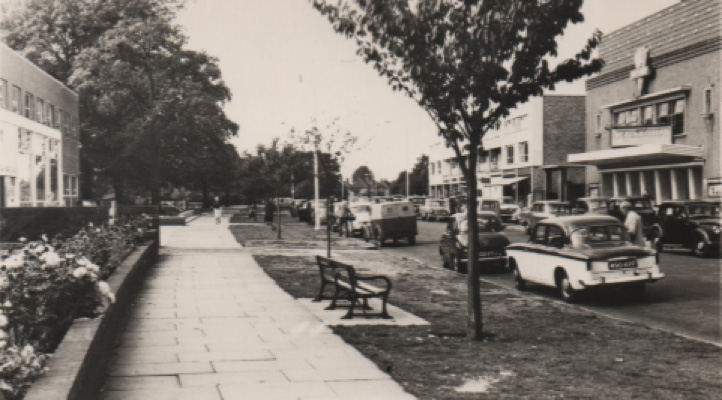 We know this photo of New Zealand Avenue was taken in 1959, because the film being advertised at the Regal cinema on the right, ‘Jet Storm’ starring Richard Attenborough, was released in that year.

The Regal was opened in 1938 and was said to be one of the most modern in the country at the time. The manager was Clifford Spain, a noted amateur film maker in his own right, who had left another Walton cinema, the Capitol (later the Odeon) to open the new establishment. As in many cinemas of the time, there was an organ which was played between films to entertain the audience, rising up from a lift in the orchestra pit.

There were 2000 seats, prices for which ranged from 6d (2 ½p) in the front stalls to 3s 6d (17 ½p) in the front circle after 7.30pm. Unlike the two other cinemas in Walton (the third was the Regent, which survives as a pub in Church Street), the Regal had a restaurant too.

In 1938 you could get a four-course lunch there for 1s 9d (9p). The cinema, and the contemporary parade of shops seen beyond it, were later demolished, and the site is now occupied by the Heart shopping and flats development. Also seen in the picture is the then newly-built telephone exchange, on the left. New Zealand Avenue itself was only built a few years before the cinema, across the former Ashley Park estate which occupied a huge swath of land between the High Street, Ashley Road and Oatlands Drive.

The road was named to commemorate the New Zealand hospital which was established at Mount Felix house, next to Walton Bridge, during the First World War. The New Zealand government offered native trees to plant along the avenue, but there were not felt suitable and planted in Stompond Road park. The flowering cherry trees seen in the photo were planted here instead.

Nick Pollard is Chairman of Sunbury and Shepperton Local History Society, who hold monthly meetings with talks of local interest. The next is on Thurs 18th September when Nigel Scott will be talking about ‘The History of London Irish RFC’ at Sunbury Methodist Church in Staines Road East at 8pm. All welcome, admission £2 non-members.