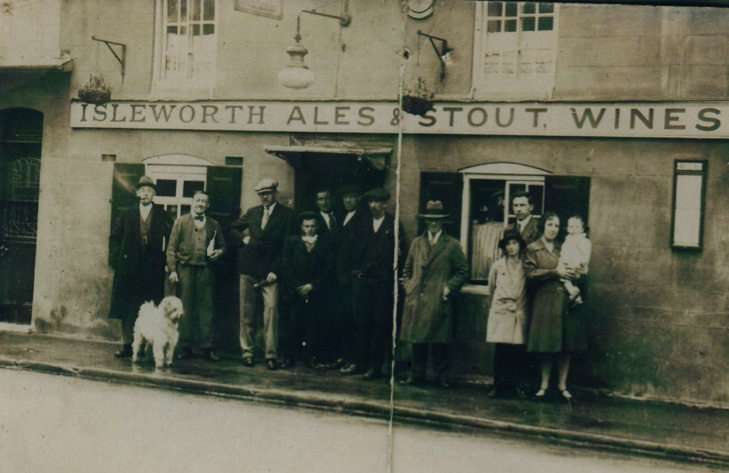 This month’s picture shows a group of people in front of the Three Fishes public house in Green Street, c1930. Above their heads a sign proudly advertises the products of the Isleworth Brewery, who had acquired the pub in 1889, but in fact by the time of the photo this brewery had been taken over by Watney Coombe Reid of Mortlake. As well as the Three Fishes, under the deal Watney also took over the Castle, George, Phoenix, and Railway Arms all in Sunbury.

The Three Fishes is one of Sunbury’s oldest pubs, and occupies what may be the village’s oldest building, possibly dating from the 16th century, but largely rebuilt in the 17th and 18th centuries. It seems the pub has not has always been in this building though. The Three Fishes first appears by name in a lease of 1665, and in 1671 another lease on the property was granted ted by the then Lord of the Manor, Francis Philips, for 99 years at six shillings per year.

Interestingly, the description of the property in the lease describes it as being located between the River Thames and the road from Sunbury to Hampton, and to the east of the grounds of John Wynall. So the pub was on the south side of Thames Street, next to the river. It is known that John Wynall owned the Flowerpot Inn at this period, so it seems possible that the Flower Pot was also next to the river, on the opposite side of the road to its current position. The reason the Fishes moved site is not recorded, but it seems possible that the cellars would have been subject to flooding, so maybe that was the cause.

The move seems to have taken place by the early 18th century, and at this time the pub was was being used to hold the Sunbury Manorial Courts. These were not concerned with crime, but adjudicated on local matters such as fees due to the Lord of the Manor, property and other rights.

In 1823 the pub was sold by auction at the Flower Pot to Mr Farnell Watson for £810, and the sale particulars described the building as having a parlour, tap room, bar, kitchen, cellar, pantry and three bedrooms. also a clubroom, detached soldier’s room (used to billet passing soldiers in the days before barracks).and a stable. The latter was used to house the parish fire engine.

Fortunately the Three Fishes retains many of its original features, although these days the fire engine is kept elsewhere!.

To learn more about the history of Sunbury’s pubs, see ‘A History of Sunbury’s Pubs’, published by the Sunbury and Shepperton Local History Society and available from Squire’s Garden Centre or via the society’s website www.sslhs.org.uk.