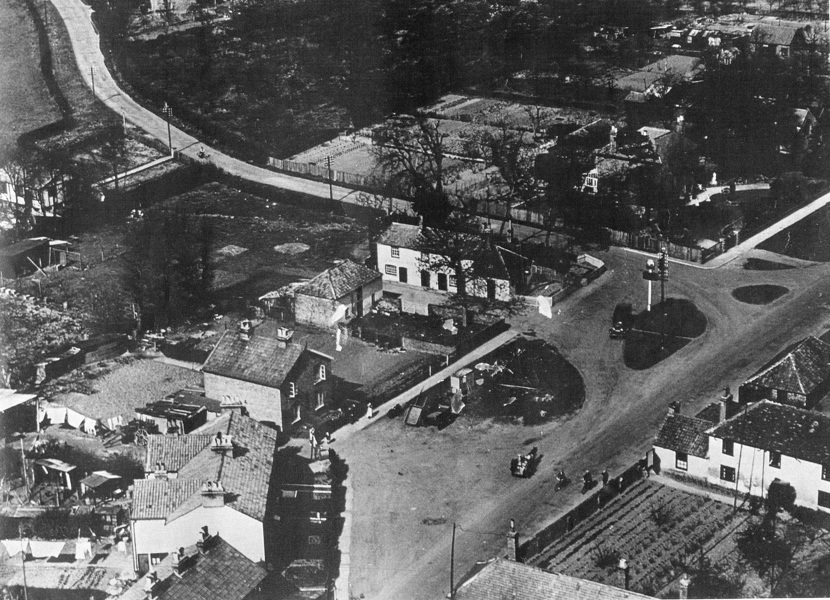 This fascinating view of Upper Halliford from the air was taken sometime in the late 1920s. At the centre is the Goat public house, with Charlton Lane winding away behind it to the top left of the photo. This road was of course cut off from the centre of the village by the Halliford Bypass in the early 1960s. The Goat was considerably smaller than it is now, having been extended at the rear and across the courtyard to meet the separate stable block seen in the photo.

The Goat is first mentioned in an indenture of 1697, when it was sold by Richard Hayward of Ashford to Charles Burthall and Mary Leighton of Laleham for ‘five shillings of good and lawful currency of England’. That wouldn’t even buy you a packet of crisps there now!

By 1886 it had been acquired by the Isleworth Brewery for a more impressive £1400. It was still owned by the brewery at the time of this photo, although would later be taken over by Watneys. The landlord would have been James Tickner, who was at the Goat from 1914 until 1951, his tenure broken only by service in World War One, when his wife Florence took over the license.

Elsewhere in the photo, a horse drawn milk float can be seen in the main road, the milk churn clearly visible in the back. Milk would have been sold door to door straight from the churn, into jugs provided by the householder. On the left of the photo is the yard of a blacksmith who occupied one of the cottages fronting the road, and on the right is the kitchen garden of the farm which stood on the corner of Halliford Green, with very neat rows of vegetables and fruit.

‘A Tonic for the Nation’, the story of the 1951 Festival of Britain, is the subject of the next meeting of the Sunbury and Shepperton Local History Society. The meeting takes place on Tuesday 15th May at Halliford School in Russell Road, starting at 8pm. All welcome, admission £2 for non-members. If you have any memories or souvenirs of the Festival, why not bring them along to the meeting?