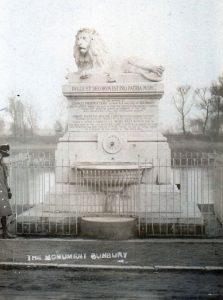 The ‘Lendy Lion’ is today a well-known centrepiece of the Walled Garden in Lower Sunbury, but this in is fact its third home. As seen in this photo dating from about 1905, it was originally erected beside the Thames, just opposite St. Mary’s Church.

The Lion surmounted a memorial to the two sons of Major Auguste Frederic Lendy, a French officer, who had run a private military academy in Sunbury. Both sons had died within a couple of weeks of each other, on military service in Africa. The younger, Edward, was a Captain in the Sherwood Foresters Regiment, but serving as an Inspector with the Frontier Police in Sierra Leone (winning the D.S.O.) when he was killed aged 25 in a ‘friendly fire’ incident with allied French forces at Waiima on December 23rd, 1893. A memorial to Edward and the French troops killed in the same incident was erected on the spot.

The elder, Charles, was a Captain in the Royal Artillery, but also on detachment, this time to the British South Africa Company. He died, aged 30, at Bulawayo in present-day Zimbabwe, on 15th January 1894. A fitness fanatic, it seems he died from complications following an internal injury when competing in the shot putt. Charles also has a memorial in Bulawayo, erected by his comrades there.

It seems their friends in Sunbury very quickly turned their thoughts to commemorating the brothers in their home village, as in The Standard for 12th February 1894, a letter from Mr J.H. Matthews of ‘Rippledene’, Sunbury, was published, appealing for funds to build a memorial, in particular to former pupils of Major Lendy, adding that £90 had already been raised (‘Rippledene’ was a large house in French Street, later known as ‘Beauclerc’, and now the site of Beauclerc School).

The memorial was duly erected soon after, and as can be seen, besides the Lion and an inscription to the Lendy brothers, it also incorporated a drinking fountain and was surrounded by railings. It formed a prominent landmark on the riverbank between Wilson’s Ferry and the now-demolished house ‘Weir View’, for the next 45 years or so.

In 1940, during the Second World War, a stick of bombs fell across the area, and one demolished the Lendy Memorial. Only the Lion was salvaged, and eventually it was moved to the lawn in front of the Sunbury Council offices, which were then at Benwell House , at the northern end of Green Street.

In the 1980s, when plans were made to revitalise the walled garden in Sunbury Park, which had recently been acquired by Spelthorne Council, the Lion was re-erected on a new plinth with a copy of the original inscription.

The Sunbury and Shepperton Local History Society has its usual stand in the marquee at Shepperton Village Fair on June 9th. Do come along and see our exhibition of old photos, or purchase one of our range of books dealing with the history of the area.