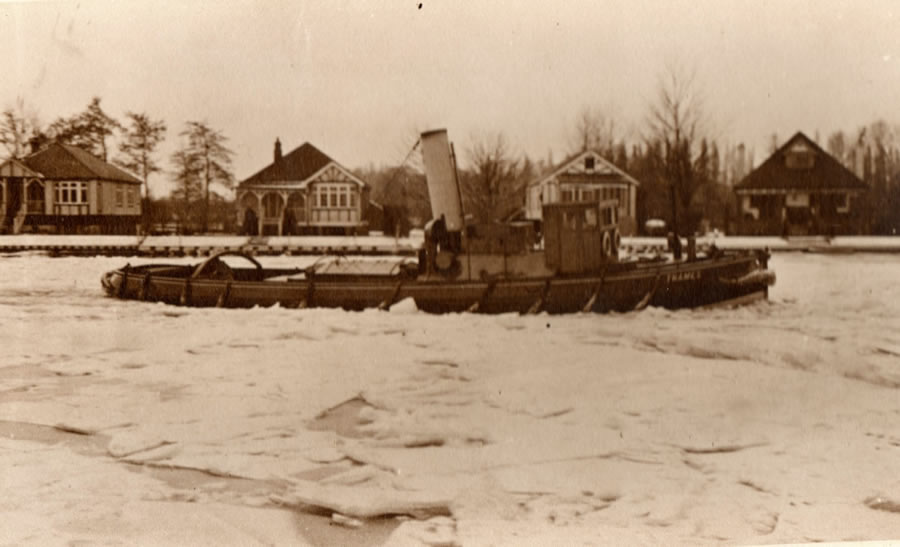 This photo was taken looking across the frozen Thames at Dockett Eddy, Shepperton in January 1940, and shows the Thames Conservancy tug Thames battling its way upstream through thick ice. The first winter of the Second World War was particularly harsh, and practically all warlike activity ceased, although this was in any case the period of the ‘Phoney War’ on the Western Front in Europe, before the Nazi invasion of France began.

Sadly though there seem to be no reports in the local press about the severe weather – meteorological information was considered potentially helpful to an enemy so kept out of the press. We now know though that 1939-40 was the severest winter in modern times, after the legendary ‘big freeze’ of 1962-63. The Thames locally froze for the first time since 1895.

One item that did make it into the Middlesex Chronicle on January 7th was a report of a tug striking an obstruction on the riverbed near the reservoir intake at Laleham – perhaps it was this very boat? There was a sequel a couple of weeks later when the same paper reported that a Lincoln car had been hauled out of the water at this point, having been stolen the previous May in Esher!

The Thames Conservancy looked after the non-tidal Thames (i.e. upstream from Teddington) from 1857, when it took over the role from the City of London, until it was itself replaced by the National Rivers Authority in 1990 (and from 1996 the Environment Agency). It named all its tugs, launches etc. after the rivers within its catchment area, in this example the Thames itself.

Tugs such as this were usually employed to tow barges used for carrying spoil from dredging the river or for other major projects, but for this extreme weather event the Thames was pressed into service as an icebreaker to clear a passage for other boats – in wartime Britain some bulky cargoes were still carried on the river.

‘Cecil Hepworth-Pioneer Film Maker’ is the subject of the next meeting of Sunbury and Shepperton Local History Society. Many of Hepworth’s films were made in this area. It takes place on Tuesday 16th January at Halliford School, Russell Road, Shepperton, at 8pm. All welcome, admission £2.