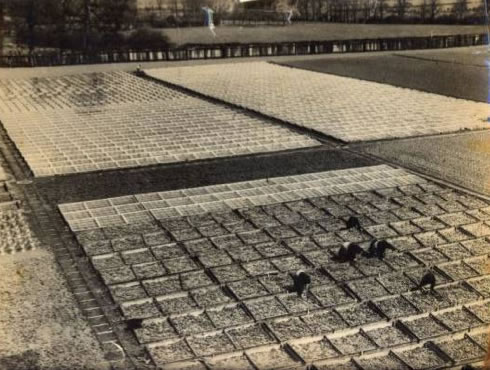 A view of the ‘French Nursery’ at Upper Halliford

Sunbury and Shepperton Local History Society presented an exhibit at the recent Surrey Local History Conference, which had the theme of ‘Feeding Surrey’. We were very pleased to be presented with the Gravett Award for the best display.

Ours featured food production over the years in this area, and this article is based on the part of our display relating to market gardening.

A market garden produces a steady supply of fruit, vegetables and flowers throughout the local growing season, as ‘cash crops’, mostly for sale at market. They were called ‘gardens’ not because of their size, but because farmers traditionally referred to their vegetable plots as gardens. As the population expanded in the 19th century, the need for food naturally grew too.

Gradually farmers became horticulturalists, and farms became market gardens, nurseries and orchards. From 1864 when the railway came to Sunbury and Shepperton, it enabled market gardeners in the area to deliver daily to the London markets. Agricultural labour was the largest employment sector locally, providing work for locals as well as seasonal workers from other parts of Britain and abroad. As suburbia grew, so did the demand for houses for the new ‘commuter classes’, and fields began to give way to houses, though a few nurseries thrived beyond World War Two.

A particular type of market garden was the ‘French’ or ‘Dutch’ nursery, which used glass cold frames or cloches to protect and advance crops. The site which is now Squire’s Garden Centre in Upper Halliford was once such nursery, run by the Yates family from 1908 until 1947 when it became Smith’s Roses, and later still Squire’s. Most of the fields were covered with glass cold frames, and a small railway was laid round the site, using petrol-engined locomotives to move manure and produce around. Overhead watering developed by British Overhead Irrigation, based round the corner at Halliford Green, was widely used in dry spells.

Despite the threat of gravel raising and other development, we can still see market gardening carried on today, such as at Watersplash Farm in Shepperton, and witness the odd tractor trundling down local roads.

To see the whole farming display, plus hundreds of other old photos of Sunbury and Shepperton, come along to the SSLHS exhibition at Squire’s Garden Centre in Upper Halliford on Saturday 20th May, from 10am until 4pm. Admission is free. The next Society talk is ‘Cowper Coles in Sunbury’ by Sir Sherard Cowper Coles, former UK Ambassador to Saudi Arabia and Israel, and grandson of the inventor who lived and worked in Sunbury, at 8pm on Tues 16th May at Halliford School, Russell Road, Shepperton. All welcome, admission £2 for non-members.