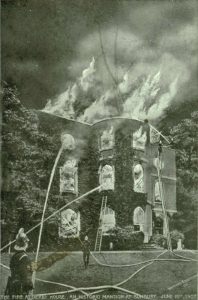 One of my favourite postcards of Sunbury is this one of the great fire at Darby House in Lower Hampton Road, on June 18th 1907. My copy was sent to an address in Shepperton and postmarked June 28th 1907, which means that someone was pretty quick off the mark producing a postcard of the event! The more so as it is marked as having been printed by the Watford Engraving Company, hardly a local business.

On closer inspection of the card though, it is evident that a certain amount of ‘artist’s licence’ has been applied to the picture. The flames and firemen have been added in, in some cases fairly unconvincingly. The fireman at the top of the ladder to the right is taking a huge risk leaning against a burning building, even more so his colleague who is depicted standing on top of the building!

You can see that the ladder with the fireman on has been added onto the top of another ladder at a completely different angle, and even a different width! Reference to a picture in the Society’s archive, of the burnt- out house after the fire, makes it apparent that a similar photo, with hoses lying on the ground and ladders propped up against the wall, was heavily retouched to make the scene more dramatic and presumably more saleable. Even in the pre-digital editing age, the camera could sometimes lie! The house itself was repaired after the fire, but the top storey was demolished, leaving the two storey building of today.

‘The Chocolate Kitchen at Hampton Court’, will be the subject of the next meeting of the Sunbury & Shepperton Local History Society. The talk by well-known food historian Marc Meltonville will take place on Tuesday 17th May at the Theatre of Halliford School, Russell Road, Shepperton and commence at 8pm. All welcome, £2 for non-members of SSLHS.