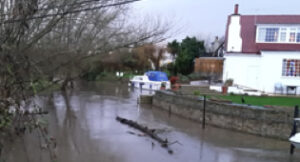 Floods, misery and devastation in the UK…again!

Twenty years ago the Environment Agency made the conscious decision to halt river maintenance. They sold off the dredgers and plant. That decision was irreversible and deliberate and broke up what was an effective and professional management of our rivers. At one point there were around 200 men working under the Sunbury EA site (then under the National Rivers Authority), responsible for maintaining the river. We have been talking to some of the old team to get their take on what should be done now.

There is a consensus that the problems started when the old ways of managing watercourses were stopped. An old NRA brochure from the 1970’s about the Sunbury Works makes interesting reading “…the workforce gained a reputation for their expertise as land drainage specialists, not only on the main rivers in the area but on lakes and streams in the south of England….For those working on and around the river, their occupation is a way of life and the protection of the environment a daily achievement”. The brochure goes on to list and elaborate on the services offered by the site, from building and maintaining lock and weir gates to flood defence, land drainage, bank protection and dredging. These were essential in the maintenance of the rivers and streams.

Speak to anyone who has lived or worked on the river and is of a ‘certain age’ and they will tell you that the reason we are in the mess we are in today is because this maintenance stopped. I saw a huge tree trunk being washed down the Creek where I live recently. To my amazement it was knocked from the mooring where it had stuck by an even bigger tree trunk. The EA did nothing so both huge trunks are making their way downstream, likely causing damage to boats and certainly blocking the watercourse. A rotten willow is hanging precariously over the Creek, ready to collapse into it.

Again the EA are aware, but do nothing. What of all the debris which was washed away by the floods two years ago. Where has it ended up? At the bottom of the river of course. Under the old management, this would all have been addressed. Our ditches and backwaters would have been cleared, trees removed and banks maintained.

It seems that today, EA management is content to employ graduates with degrees and computers who sit and model ‘What if’ scenarios rather than understanding the river and managing it accordingly.

Farmers used to get grants to drain and maintain their fields and dredge watercourses. Since those grants have been withdrawn the land has fallen into disrepair. Land is not draining and the water table is rising. Look at Holland. If they did not maintain their land, they would be under water. If they can do it, then so can (and should) we. I have read that there is an EU directive called the European Water Framework Directive, which calls on countries to allow rivers remain as close as possible to natural conditions. Dredging would therefore be incompatible with the directive. Is this another reason for refusing to implement it? Surely people are more important than voles and fish spawning? ( I am an animal lover, but we have to keep get priorities right).

The Government promised that money would be no object in 2014. All they seem to be spending on is one survey after another. The report on he EA website about the latest in the River Thames Scheme tells us of more delays after THREE YEARS of modelling and surveying. Increasing the flow capacity of Sunbury, Molesey and Teddington weirs seems essential but has been delayed until 2017.

Meanwhile the EA and government talk up the Community Flood groups which have been set up to tackle future events. We don’t want to have to deal with the aftermath. We want preventative measures taken to stop flooding happening again.
Common sense over computers! Any comments do get in touch: info@villagematters.co.uk