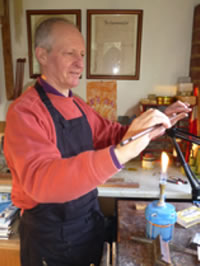 I wonder how many youngsters today are considering a career as a violin bow maker. But when the youth employment people came to visit his school, this was an option put to local resident Brian Alvey.

Brian’s father and grandfather were both carpenters so it was not unreasonable to consider a job working with wood. Brian was sent to a violin shop who needed someone, so he thought he would give that a try. After a couple of months however he hadn’t settled and was going to leave when he was persuaded to try a different department which made violin bows. He went on to complete a 5 year apprenticeship with them. That was 48 years ago.

Brian is one of the remaining bow makers in the UK trained by W.E. Hill & Sons of Bond Street (mentioned in Pepys diary). According to Wikipedia ‘Many fine craftsmen worked for the firm. They were particularly famous for their bow makers. For much of the 20th century, the Hill workshop employed England’s best bow makers.” Brian went independent many years ago. He still makes bows, but he also repairs them, re-hairs them and values them. His work comes from many areas including orchestras and outlets from all over the country as well as musicians from abroad. He does all the bow work for the Yehudi Menuhin School.

Each bow is individual and tailored to a performer in terms of weight, size and balance. It must be strong and yet flexible. The traditional material is a hardwood from Brazil known as Pernambuco. Brian takes a rough length of wood and planes it to the right shape. He needs to be satisfied that the wood itself is good enough to be a bow. He can work on it for two days just to get to this stage.

The other traditional material is of course horse hair which Brian buys in skeins from Mongolia. It has to be white. The hair may last up to a year although some musicians want it replaced every six weeks.

Other elements in the construction of the bow include ebony and mother of pearl.

We have all heard about the huge price tags of a ‘Stradivarius’, but most of us have never given any thought to the importance or value of the bow. Bows in fact are the key to bringing out the best sound of the instrument. A Tourte’ bow is the best in the market and can sell for up to £100k. Yes, just for the bow!

A good bow is usually a good investment which will see your money returned several fold when you decide to sell it. Out of idle curiosity I searched for bows for sale on the internet and found a marvellous example sold as ”stamped Brian Alvey”.

Asking Brian what he listens to, I expected him to say he was entertained with the mellifluous strains of Mozart in his workshop. Not a bit of it. He is more of a pop man himself. Very skilled and yet very down to earth.