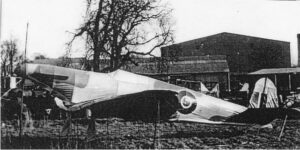 The craftsmen and women at Shepperton Studios are justly famous for their ability to create convincing scenery and models for film and TV productions. During World War Two however, their predecessors put these same skills to a more vital use than entertaining audiences.

Bombing raids on this country caused huge amounts of damage to both military and civilian targets, affecting Britain’s ability to defend itself and produce the materials needed to win the war. Because of their expertise in scenery making, Sound City Studios, as they were then called, were contracted to produce dummy aircraft made from wood and canvas, which would be parked on decoy airfields to lure enemy bombers from their intended targets.

These dummies had to be convincing from a reasonable height, but also portable so that they could be moved around, as ‘aircraft’ which did not move around would be obvious fakes. The Royal Air Force was so pleased with the dummy aircraft produced at Shepperton that they gradually gave them more and more related work. Eventually a special R.A.F. unit, ‘Colonel Turner’s Department’, was established there.

Colonel John Turner was in fact a former Royal Engineers officer, but he had been involved for many years in constructing airfields, so knew what was needed to make a replica look like the real thing. Technicians at the studios developed lighting effects which mimicked aircraft taxiing with their lights on, runway landing lights, etc so that the decoy site could be used both by day and by night.

In time other kinds of effects were developed so that railway marshalling yards or even whole towns could be decoyed. Perhaps the most dramatic effects developed at the studios were those designed to replicate explosions on the ground, to draw in more bombers thinking that a target had been hit.

These involved heated tanks into which oil would be poured and set on fire, and then water would be piped in to make the whole inferno flare up into the night sky. The decoy sites were chosen in open countryside not far from possible targets, and the crews needed to operate all the lighting effects were trained at Sound City.

The crews were in some danger during air raids as they had to be on site, albeit in a concrete bunker, to operate the lights, and were literally asking to be bombed!
So in their own distinctive way, the Studios staff played a significant part in achieving victory in the war.

‘The History of Kew Gardens’ is the subject of the next meeting of the Sunbury and Shepperton Local History Society, at 8pm on Tues. 21st October at Halliford School, Russell Road, Shepperton. All welcome, admission £2 for non-members.