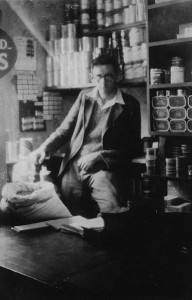 Eric lived all of his life in Green Street, Sunbury on Thames. First in Godfrey Cottages, then in 1962 when the Cottages were demolished to make way for the parade of shops that were to become Hampton Stores, he lived on the premises, and, finally, after the Stores were sold, in a flat above the shop, right next to the Admiral Hawke.

The Hamptons had a long family tradition in shop keeping. Eric’s grandmother had first started the retail business when she began selling sweets arrayed in jars in the front window of her house in Godfrey Cottages. Her husband had been killed when a horse bolted in French Street. There was practically no assistance at all for widows at that time, so in order to provide for an income to support her family, Eric’s grandmother bought reject sweets from a local factory, bottled them up and sold them.

The business continued when Ethel and Charlie took over from Ethel’s mother. Charlie worked for the council and Ethel was the retail driving force with their two sons, Leslie and Eric both lending a hand from a very early age.

Eric was in poor health as a child, and was not expected to life beyond twelve, but he certainly proved his doctor wrong for at fourteen he started working in the shop full time. And, as his family say “that is where he stayed” for the rest of his working life, soon becoming a familiar figure serving in his traditional shop keeper’s coat.

The three shops were interlinked, and whilst Eric mainly worked in the sweet shop (with Les managing the grocers, greengrocers and floral tributes) he would also pop up and serve in the other two shops.

Hampton Stores was a true community resource and the expression “Open all hours” could have been coined for them. The shop opened for twelve hours a day, seven days a week, 365 days a year.

Christmas day dinner was always eaten mid afternoon as the business was open on Christmas morning. The shop also stayed open on the day of Ethel’s funeral as service to the customers was always paramount.

Hampton Stores provided their customers with staple provisions with no pre-packing, sell by dates and very little food from abroad; home boiled ham, bacon sliced from the carcass, biscuits sold loose from tins, cheese cut with a cheese wire from a wooden roundel and everyday necessary items were their staples. And, in addition to their over the counter service, the family also provided a home delivery service.

Such was their essential position for many years in Sunbury’s retail life, that the family still have a postcard, sent many years ago from customers who, after the usual “wish you were here” sentiments, then appended their shopping list for the groceries to be delivered upon their return from holiday. Indeed, when the first “self service” supermarket opened at Sunbury Cross the family view was it would never catch-on!

When Les took on the mantle of running Hampton Stores; his children followed in uncle Eric and their father’s footsteps by helping out.

During this annual holiday, his brother Les would cover Eric’s time and would often be met with the comment of “You can tell Eric is on holiday”. As, unlike Eric’s habit of staying open all hours, Les would close the shop up at “only” 7pm in order to spend some time with his wife and family!

After Les & Eric sold Hampton Stores in 1988, Eric was content to potter. He had always had dogs since he was a boy and after his retirement became a familiar sight in Sunbury walking his dog twice a day, every day whatever the weather. Eric’s route never varied and was a far ranging circuit taking in School Walk, Upper Halliford, round Sunbury Park and then back home.