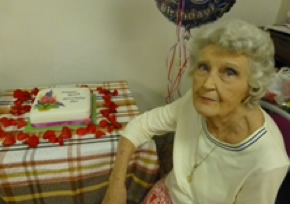 Pat Eustace has lived in Shepperton for 70 years and is known to many. Having spent her early years in film and dance, she has been a member of the Riverside Arts Centre since it opened, as well as a member of the Sunbury Flower Club, exhibiting regularly and winning prizes. Since the 1980s, she has served on the committee of the Sunbury & Shepperton Art Association which runs the annual Arts Festival.

Pat started dancing at the age of 10 and was introduced to the world of film by her mother who worked as an extra in the era of silent movies. She had been doing some modelling work in London but realised she could make far more in the film business as an extra. Her experience in dance was an asset and she could earn more if she was prepared to dance. During her first experience as an extra in ‘The First Gentleman’, Pat was identified as someone who would be good as a stand in for Margaretta Scott and this was a great opportunity for her. She subsequently acted as stand in to Maureen O’Hara and to Ingrid Bergman amongst many others.

It may sound glamorous being a stand in, but in reality it meant early starts, a lot of standing around and a huge amount of patience.

Pat married her old school friend Edgar and they moved to Shepperton Lock in a house which was a former cricket pavilion. Edgar had the opportunity to buy it cheap and transported it down to Shepperton. Pat has lived by the lock ever since. She continued to do a bit of modelling, including for knitting patterns, in which she also involved her children. So if you have any old knitting patterns from the 1950’s you may well have seen them!
Pat has just  celebrated her 90th birthday. She has preserved her beautiful looks and although she may not be dancing any longer she has preserved her interest in the arts. She also continues to entertain and inspire, which was evident by the friends and family I spoke to at her recent celebrations.

“Pat is quite simply an inspiration” said one.

Just around the corner from Shepperton Studios is the beautiful church of St Mary Magdalene, Littleton. It was founded in… END_OF_DOCUMENT_TOKEN_TO_BE_REPLACED