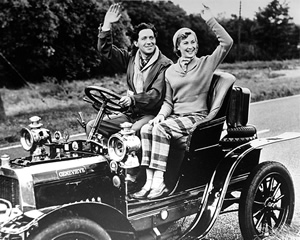 Many well known people have made their homes in Shepperton over the years. Perhaps because of the proximity of Shepperton Film Studios (though these are technically in Littleton), these have included numbers of people involved in the film and entertainment industry. Creek House in Chertsey Road had been home to two such people. In the 1950s it was lived in by Bernard Braden and Barbara Kelly.

This Canadian couple came to Britain in 1949, and Braden soon began a radio show, Breakfast with Braden. His most famous show however, was The Braden Beat on Independent Television, which ran from 1962-67, and then as Braden’s Week on BBC. It combined a light heated look at current affairs with consumer investigations and entertainment form people such as Jake Thackeray, Peter Cook and Tim Brooke -Taylor. After Braden left the BBC over a dispute about being involved in an advert for ITV, the format of the show was successfully copied in That’s Life, presented by Esther Rantzen, who had been a researcher for Braden.

Barbara Kelly was a successful actress in her own right, and appeared in several of her husband’s shows, but was best known for TV work as a panellist on the long-running quiz ‘What’s My Line?’ between 1951-63 (revived in 1983-86). She later became a successful agent providing celebrities for the after-dinner speaking circuit.

The actor John Gregson lived at Creek House, from 1958 until his premature death, aged 55, in 1975.He was born Harold Thomas Gregson, of Irish descent, in Liverpool. He became involved in amateur theatrical productions as a young man, before serving in the Royal Navy during World War Two. After the conflict he made acting his profession. He married the actress Ida Reddish in 1947, and moved to the London area, eventually having a family of three sons and three daughters.
Gregson appeared in 40 films between 1948 and 1971, including ‘Angels One Five’ (1952)’, ‘Above us the Waves’ (1955) and ‘The Battle of the River Plate’ (1956), as well as the Ealing Comedies ‘Whisky Galore!’ (1949), ‘The Lavender Hill Mob’ (1951)’, and ‘The Titfield Thunderbolt’ (1953).

Perhaps his best known performance was in ‘Genevieve’, which was selected for the Royal Film Performance in 1953 and won a BAFTA award for best film. Despite being based around the London-Brighton veteran car run, parts of the film were actually shot in Spelthorne, along Stanwell Moor Road and at Stanwell Mill in Horton Road! John Gregson also appeared in several TV programmes, notably as Inspector Gideon in the 1960s series ‘Gideon’s Way’.

As a Roman Catholic, Gregson attended the Catholic church of St. John Fisher in Wood Road, Shepperton Green. He was buried at Sunbury Cemetery.

Spelthorne Museum is presenting an Exhibition on ‘Famous People in Spelthorne’ at the museum in Staines (entry through Staines Library) from January until July 4th.

The exhibition is in the Thames Room, open Wed, Fri and Sat afternoons, admission free.

Just around the corner from Shepperton Studios is the beautiful church of St Mary Magdalene, Littleton. It was founded in… END_OF_DOCUMENT_TOKEN_TO_BE_REPLACED