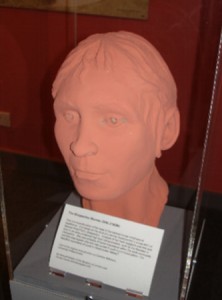 No, not another term for ‘ladies who lunch’ or perhaps more recently, those for whom waders or wellies are the latest ‘look’. The Shepperton woman in question is the oldest known inhabitant of the area, who lived here 5,500 years ago.

In 1989, archaeologists working at a gravel pit site at Staines Road Farm, Shepperton (off the Laleham Road, north of the M3) discovered a ring ditch and bank, or ‘henge’ measuring 22 metres in diameter and dating from about 3500BC. Its exact use is unknown but clearly was a centre for ritual activities as two bodies were found buried in the ditch. One of them was the complete skeleton of a woman, found in a crouched position.

Specialists in reconstructing facial features from skeletal remains have been able to produce a model of what they think her head would have looked like, a cast of which is on view at Spelthorne Museum. Analysis of her teeth revealed that she had been brought up in an area where lead was present, perhaps the Mendips, North Pennines or Derbyshire. She

may well have been a person of some significance in the local Neolithic society. Buried nearby was the skull of a wolf, or possibly a very early domesticated dog, which perhaps had some connection with the woman.

Other finds from the ditch included picks made from deer antlers, possibly used to excavate the feature, and some early pottery. This site and others nearby at Bronzefield Prison (Ashford) and Heathrow Terminal Five, are proof that a sophisticated society existed in the area in the Neolithic period, able to organise labour to construct these monuments, and having a belief system. This was the time (c4000-2500BC), when people first began to settle in one place and farm, as distinct from the earlier nomadic hunter gatherers.

The site was used for many centuries, and even a thousand years later was used for feasting as shown by a hearth and adjacent boiling pit and waterhole. Sadly the henge was subsequently destroyed by gravel raising, but not before the secrets of its long history were revealed. Some of the finds from the site are on display in the Museum of London.

‘Cameras and Corsets’ is the intriguing subject of the next meeting of the Sunbury and Shepperton Local History Society, at 8pm on Tues. 22nd April 2014 at Halliford School in Russell Road, Shepperton. All welcome, admission £2 for non-members.

To learn more about local archaeology and history, visit Spelthorne Museum at Staines. The museum is open 6 days a week through Staines Library, during library opening hours, with extra displays and the shop open on Wed, Fri and Sat afternoons. Admission is free to all.