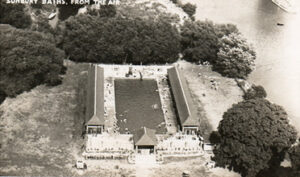 The Thames is unique in this country in having a series of inhabited islands. There are several in the Sunbury area. Travelling downstream, the first is Wheatley’s Ait. This long island is separated from the mainland by the narrow waterway known as the Creek, and was split into two by a flood relief channel and weir in 1933.

Several houses, and the campsite of the Thames Camping and Boating Association, occupy the upstream end which is accessed via the road also called The Creek. Below the middle weir, on the downstream part of the island, are the works of the Environment Agency and some more houses. Access to these homes is via a bridge owned by the Environment Agency.

The main weir at Sunbury stretches between the tail end of Wheatley’s Ait and Sunbury Lock Ait. This island was created in 1812 when a long channel was dug across the long bend of the river here. This was needed to accommodate the new lock built by the City of London, to improve the navigation of the river.

The lock was built towards the tail end of the lock cut, next to where the old lock-keeper’s house still stands. In 1856 the lock was rebuilt at the tail end of the cut, with a new lock keeper’s house on the island – at the same time the footbridge to the island was added. A second lock was added alongside the first one in 1927. The various sheds and outbuildings belonging to Wilson’s boatyard were added at the upstream end from the late 19th century onwards. Much later the clubhouse of the Middle Thames Yacht Club was added on the Sunbury side of the island, next to the lock.

Next is Rivermead Island, which is uninhabited. The downstream end was once a separate island, called Swan’s Rest , but the intervening channel has long since silted up. Sunbury Urban District Council acquired the island for recreational use in 1908, and in 1935 built an open-air swimming pool there. This amenity, fondly remembered by many in Sunbury, was closed in 1980 and no trace of it now remains. Rivermead Island is perhaps best known now as the site of the Sunbury Regatta each August. Access is by a footbridge across a small channel, alongside a ford for vehicles which has been the cause of much entertainment over the years!

Sunbury Court Island, once called Hayes Ait, is now named after the imposing house, owned since the 1920s by the Salvation Army, which stands on the adjacent mainland. Houses were first built on it in the 1920s, and access from the Lower Hampton Road is by a footbridge, which has a decorative former water tower at the entrance to the island.
Lastly, just downstream from Sunbury Court is the tiny Grand Junction Island, named after the nearby intake to the waterworks originally built by the Grand Junction Water Co. (part of the complex at Hampton).

Now owned by Thames Water, plots have been leased to people who over the years have built small houses for weekend and recreational use. It is also connected to the mainland by a small footbridge.

The Sunbury and Shepperton Local History Society will be exhibiting many old photos of the regatta and the riverside on their stand at Sunbury Regatta on 10th August 2013.