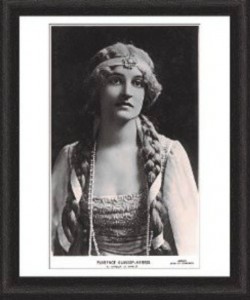 At the turn of the last century, Sunbury was a weekend and holiday destination. The river was bordered by many little cottages and the beauty of the river and peace of the village offered sanctuary from the bustle of London.

One such visitor was Florence Glossop-Harris, a renowned Shakespearean actress of the time, who came regularly to Sunbury together with a colourful entourage of luvvies. She would take the train to Sunbury, then a taxi to the old Conservancy Cottage on Fordbridge Road. At the time this was the only way to get across to Wheatley’s Ait. She would get her luggage transported over the only bridge to the island where she stayed in the cottage called “Cubiculo”.

The group’s visits to Cubiculo have been documented in a scrap book written and illustrated by one of the group in 1928. Known as ‘Perk’, he was in fact Captain Perkins, and the impresario for the group, having served previously in the Great War. The scrapbook offers a rare and intimate glimpse into the past, and I was privileged to have a chance to look at it. Perk clearly had a great sense of humour and was also a skilled artist. The illustrations are all cut out of wall paper and the like, and glued together as a collage. The caricatures of the visitors are full of expression and cheek, and the scenarios they are in, showing tableaus from their visit are great pieces of observation and sometimes sauciness!

The group used the services of Sunbury’s Dennis Brock’s grandparents, who used to prepare the cottage and deliver groceries from Darts stores by punt up the creek. Dennis was 10 at the time and has a good recollection of the group and the impression they left on the neighbourhood – not always positive! The scrapbook includes a map of the houses on the island and a legend showing the nicknames for many of the neighbours, often after dogs: Spaniel, Terrier and Chow, or more exotic in
description; “Bird of Brilliant colours. Slightly soiled” referring to the lady at no7!