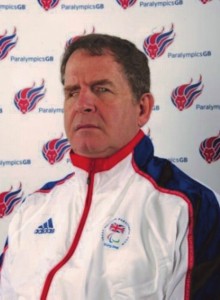 I was lucky to be invited recently to hear the Rotary Prestige lecture by Mike Brace, the blind paralympian. It was very thought provoking indeed. We may talk about a blind person, or an amputee, or someone in a wheelchair, as “disabled”. But is this not the wrong label? Does this not in fact perpetuate the attitude of pity towards those we deem to be in some way “incomplete”.

For Mike it is all about changing perception. In his case he went about this by concentrating on becoming good at something, focusing on what he COULD do and not what he could not. The way he described his condition; “I have an impairment. It is peoples attitude that gives me a disability” really made me think. “It’s about a state of mind” he says, “My state. Your mind”.

His love for sport could have been completely scuppered when he lost his sight at the age of only 10, but he owes it to those around him who ENABLED him to find himself again through what he was good at and had a passion for, namely sport. At the Olympics this year we will watch in awe at the feats of top athletes and sportsmen. For me however it is the paralympians who are the superstars.

They would not let injury or impairment affect them. Things are changing. For the first time this year the Opening and Closing Ceremonies of the Olympics will have an audio accompaniment. Mike talked about the hours of ceremonies he had sat through without having a clue what was happening because it is all visual.

Mike’s good friend Jimmy Wright was a Shepperton man. He was also blind and went on to make a great career in the film industry, and was the man behind the “Talking News”.

Thankfully progress in technology has been a great enabler. I had not thought before about what a positive this would be for a blind person; voice recognition technology to both type and to interact with your smart phone.

So with technology progressing, lets hope our own focus can change and embrace ability in each other, not look at what is lacking.