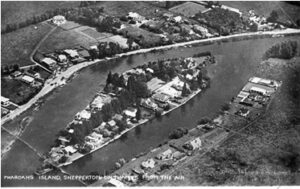 The Thames is unique in this country in having a series of inhabited islands. There are several in the Shepperton area. Travelling downstream, the first is Pharoah’s Island. There is an old tale that it gained its name after being presented to Admiral Lord Nelson following his victory at the Battle of the Nile in 1798. Actually, the island was known as ‘Dog Ait’ until at least the end of the 19th century.

It is said that Sir Cyril Atkinson, who built the first house on the islands, called it The Sphinx because of his interest in Egyptology, and as other houses were built, they also acquired Egyptian names and so the island came to be renamed Pharoah’s Island. There is no bridge and everything still has to go to and fro by small boat.

Hamhaugh and Shepperton Lock Islands were both formed artificially, when Shepperton Lock was built across a narrow neck of land spanning a loop of the Thames. The river often breached though this neck, known as ‘Stonor’s Gut’, in times of flood, and it was the obvious place to build a lock when the City of London began its programme to improve navigation on the river. Shepperton Lock was opened in January 1813. At the time, Hamhaugh was known as Stadbury, and owned by Lord Portmore of Weybridge. He complained in 1815 about the trouble his tenant was having in carrying his hay off the new island.

In 1898 the lock was rebuilt, and a new weir channel was created which split Hamhaugh Island off from the Lock Island. The old lock keeper’s house was demolished, and a replacement built at the upstream end of the new lock. This was hit by a bomb in 1940, and sadly the lock keeper’s daughter was killed. The house now used by the lock keeper is the former Thames Conservancy Area Engineer’s house.

The Dunton family, who owned the boatyard and ferry at the end of Ferry Lane (now Nauticalia), also owned Hamhaugh by this time, and from 1900 started to let plots for camping. By the 1920s these were being sold off, and so more permanent dwellings were gradually constructed. River water was used for all purposes other than drinking and cooking, and a communal lavatory on the central green served all the islanders! Electricity finally replaced oil lamps in 1948, and mains water was only connected in 1959.

Downstream from the lock is D’Oyly Carte Island. Originally known as Folly Ait, in 1888 it was purchased by Richard D’Oyly Carte, impresario of the Gilbert and Sullivan comic operas, and owner of both the Savoy Theatre and Hotel. He built a large house on the island as a country retreat, and apparently it was often used by the Savoy Opera company, including Gilbert and Sullivan, to rehearse at weekends. Originally reached only by ferry, a bridge was added in 1964. It is currently for sale if you have £4 million to spare!

Desborough Island was created as recently as 1934-35 when the Desborough Cut was made, to improve navigation and reduce flooding in the area. The Cut and Island were named after Lord Desborough, a famous rower and sportsman of his day, who was Chairman of the Thames Conservancy at the time. There are only a couple of houses on the island, as well as a waterworks and the Vandals Rugby Club.

You can read more about the story of the Islands in ‘Shepperton’s Island Dwellers’ by Val Brooking, published by Sunbury and Shepperton Local History Society, and available from Squire’s Garden Centre and Nauticalia.

Just around the corner from Shepperton Studios is the beautiful church of St Mary Magdalene, Littleton. It was founded in… END_OF_DOCUMENT_TOKEN_TO_BE_REPLACED