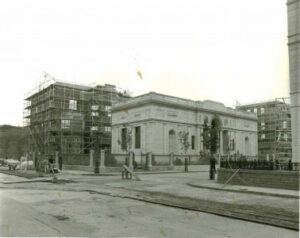 I was lucky to take part in the visit in July to the Shepperton Studios courtesy of the Sunbury & Shepperton Arts Festival. I was not the only one of the group filled with excitement about seeing stage sets and the odd star wandering about. But that was far from it! Shepperton Studios is a large thriving enterprise and its secrets are closely guarded. However, even without seeing a single swoop of Batman’s cape, I was still intrigued by the visit and was somewhat in awe of being so close to so the film sets of so many blockbusters…. in the little hamlet of Littleton!

Shepperton celebrates its 80th anniversary this year. David Godfrey, Director of International Operations gave us a great talk on the history of the studios. He himself has worked there close to 30 years, one of a permanent staff of only 200. The total site is around 46 acres, 26 on the main site so a huge area. There are 75 tenanted companies on the site offering Film Directors a one stop shop where they can make a film from A to Z.

It was 1931 when Norman Louden purchased Littleton Manor and the site for £5k! He had made his money in Flicker films, but saw Movies and Talkies as the future. At the time Elstree was the largest studio, but it specialised in silent films whereas Shepperton built set for the Talkies. Under ownership of the Korda brothers
films such as Sanders of the River were made, involving the construction of an African village and import of African extras and wild animals!

World War II saw productions cease and the Studios were requisitioned in 1941 by the government, who first used it for sugar storage and later to create decoy aircraft and munitions for positioning in the Middle East. After the war, Alexander Korda produced Graham Greene’s The Third Man, voted by many as the best ever UK made film. The Golden Age of film was dawning and the studios went on to produce some of the most iconic films: A Man for All Seasons, African Queen, The Day of the Tryffids. I had no idea the such classics as Gandhi, Shakespeare in Love, A Passage to India, The Omen, The Elephant Man to name but a few, were produced on our doorstep!

Recently films such as Prometheus, Batman; Dark Knight Rises and 47 Ronin with Keanu Reeves were filmed there, the latter requiring the construction of an ancient Japanese castle on the land bordering Laleham Nursery, where it was clearly.

I found out that Shepperton has the largest floodable stage in the world. You may have seen the cliffs and sea in the scene on the Guns of Navarone – and it was filmed on that very stage.

In the last decade Shepperton merged with Pinewood and Teddington Studios was added to the stable. This has made the studios the larges supplier of film production space in Europe. The company also has bases in Toronto, Berlin, Malaysia and the Dominican Republic where there a huge tank facility used for some of the Pirates of the Caribbean scenes. The total stage space on offer makes it the largest in the world.

Shepperton hosts companies from all aspects of film from pre to post production. There is a large facility where all the Disney films are versioned into foreign languages – apparently at the rate of 150 per year.

Shepperton was honoured in 2011 with a Bafta for Outstanding British Contribution to Cinema.

Just around the corner from Shepperton Studios is the beautiful church of St Mary Magdalene, Littleton. It was founded in… END_OF_DOCUMENT_TOKEN_TO_BE_REPLACED