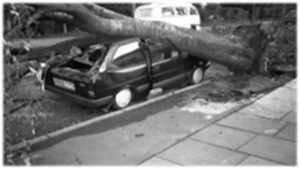 In the 1980’s my daily drive to work at Teddington, was usually via Bushy Park. However, on the morning of Friday 16th October, due to storm damage, the park had been closed. I therefore used Hampton Court Road and found that this major thoroughfare was overwhelmed with fallen trees and damaged vehicles. This was to be my first encounter with the remnants of the Great Storm.

On the night of 15-16 October 1987, England, the Channel Islands, and parts of France, experienced hurricane force winds. Extensive damage was caused, particularly in South East England, where eighteen people were killed. Among the most damaged areas were Greater London, the Home Counties, and East Anglia. Forests, parks, gardens, roads, railways, were strewn with fallen trees.

Three million houses were damaged, costing the insurance industry millions of pounds in claims. In the city of London 200 chimney stacks collapsed, and the roof came off the Palace of Westminster. Schools and some businesses closed, and the National Grid suffered heavy damage leaving thousands without electricity. Engineers were drafted in from other areas to help restore power. The London fire brigade answered 6,000 calls, and several ships capsized in the English Channel.

The background to this catastrophe is that most storms head in from the Atlantic to the west of the UK, but this storm developed over the Bay of Biscay. Warm tropical air and cold polar air collided, forcing warm air to rise and creating an area of low pressure. The difference in temperature caused rapid ascent. The greater the difference in pressure, the faster the flow of air, and in this case, it led to the hurricane force winds. The strength of the storm was boosted by a phenomenon known as ‘The Sting Jet’ where cold dry air descends into storms high in the atmosphere. By the time this ‘sting in the tail’ reaches the ground it can produce winds of 100 mph.

To be classified as a hurricane a tropical cyclone must have one-minute maximum sustained winds of a least 74 mph. The highest gust in the UK was 122 mph at Gorleston on Sea, Norfolk.

The day’s weather report failed to indicate a storm of such severity. The apparent suggestion by BBC’s Michael Fish of a false alarm is celebrated as a classic gaffe, though he claims he was misquoted. As a result of this storm major improvements were later implemented in atmospheric observation.

Some of the worst damage was suffered by Britain’s trees with an estimated 15 million ripped out by their roots. In the London area royal parks including Bushy and Richmond had many damaged or fallen trees. At Wisley Gardens the storm felled almost all the pines. Many specimen trees perished at Kew Gardens, and Hyde Park lost hundreds of trees, including some that were decades old. A great deal of replanting has been carried out since 1987, and the National Trust alone has planted more than 500,000 trees. Since that time more than 500 million saplings have been planted in the UK and tree cover in Britain is now greater than it has been for 150 years.
‘If a tree dies, plant another in its place’.